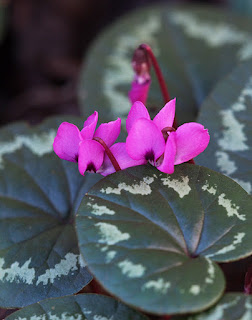 I've become lazy about keeping track of first blooms in the garden. I think this is because, having taken fairly careful notes, for several years, I've satisfied my original curiosity about the consistency of bloom dates. At first I recorded the first blossoming of virtually every plant in the garden. More recently I've limited by attention to a smaller sampling and missed a few dates I would have liked to have recorded more carefully.

As usual, Cyclamen coum, a dwarf cyclamen variety, was the first flower to bloom in the garden in the new year, several blossoms were already open on the 2nd or 3rd of January, but a single blossom had already opened on December 16--which is quite a bit earlier than every before. Probably an outlier, not part of a trend. Last year this plant bloomed first on January 4. So, aside from the one early bloom, this is in line with its usual pattern. 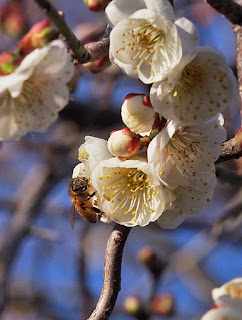 The white flowering plum on the side of the house began blooming almost a week ago, but I missed the exact date. Probably around January 4. Always pretty, always delightfully fragrant, the bees are already swarming it, probably mostly to collect the abundant pollen. We lost our bees this past summer, so these are bees from hives the neighbors keep. The plum first bloomed last year on January 14, so this is comparatively early, although not unusually so. The tree has had its first flowers as early as December 30 in the past.
Posted by Colin Talcroft at 4:53 PM