Books I'm Reading: Alone in the Kitchen with an Eggplant 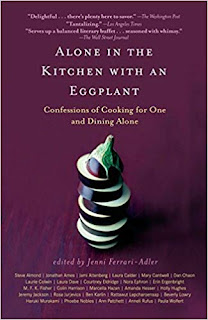 This was a surprisingly pleasurable read. Alone in the Kitchen with an Eggplant, subtitled: Confessions of Cooking for One and Dining Alone (edited by Jenni Ferrari-Alder, Riverhead Books, 2007) is one of those books that's been in my library for years; I can no longer remember when or where I acquired it. It may have been one of those left behind by my father. But I wish I had read this collection of 26 essays about solo cooking and eating alone sooner.

The essays are independent. Some include recipes (always for one), some do not. They can be read in any order, I imagine, but I found the stories had a certain cumulative effect; by the end of the book, I felt like I'd had a moving lesson in the way human beings respond at the intersection of food and solitude—solitude sometimes welcome, sometimes not. This is as much (or more) about being alone than it is about food.

Some of the names were familiar—M. F. K. Fisher, Nora Efron, Mary Cantwell, and Haruki Murakami, for example—most were not.  The writing is somewhat variable. Although good on the whole, one or two of the selections seemed a trifle unnecessarily vulgar to me—but there are real gems here, too. I think my favorite is the essay about asparagus by Phoebe Nobles. I don't want to spoil the fun, so I will say nothing about it except that it had me laughing out loud, which was a touch embarrassing as I read it sitting at the counter of the Pangloss wine bar in the town of Sonoma after a day of work driving wine tasters around the Sonoma wine country.

If I had to complain about anything, it would be the lack of an index. It might be necessary to re-read the book to find a recipe again or a particularly pleasurable paragraph, but this is a quibble; I might re-read it again soon anyway. Recommended.
Posted by Colin Talcroft at 8:39 AM