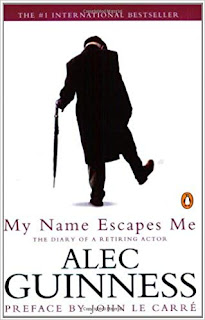 Penguin asked Alec Guiness to keep a diary for a little over a year in the middle of the1990s. My Name Escapes Me (Penguin 1996) was the result. It's an idiosyncratic collection of daily jottings that, as the author himself puts it, reveal his "phobias, irritations, prejudices, childishness, and frivolity" (although he's a little hard on himself; he doesn't come across as terribly prejudiced, childish, or frivolous). It is mostly a dryly observed record of what Guinness was up to in 1995, by which time he had mostly retired from acting.

Apparently, he was an art lover. There are a number of pages about paintings he wished he could own. There is a fair amount of travel. There is a great deal of dining with friends and reminiscing about the theater and film. While Guinness drops names left and right, you never get the feeling he's doing it to impress. He simply knew many well known actors and actresses (although a fair number of the early British stage actors mentioned were unfamiliar to me).

Always intelligent, often quite funny (I especially enjoyed the several remarks that reveal he deeply regretted his connection to Star Wars). Not a challenging read, but entertaining and worth the time.
Posted by Colin Talcroft at 3:16 PM