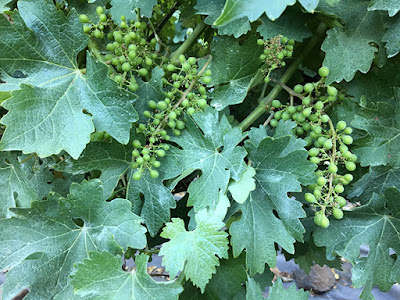 For the first time in the 16 years I've been making wine from our backyard grapes, this year I'm treating the vines against mildew using a duster rather than a sprayer. It consumes more sulfur powder than the sprayer, but being lightweight, it's much easier and faster to use than the sprayer. The question is whether the fine sulfur dust works as well to prevent mildew.

Actually, spraying the grapes has never been as effective as I would like. Using the sprayer, the sulfur doesn't stick very well; most of it runs off. The powder seems to adhere better, but it's so fine it's hard to tell. So far, everything looks good, helped by the very cool spring and early summer we had this year (with one, short, extremely hot three-day period an exception). Mildew likes things warm and damp. Late rain kept things comparatively damp, but it was never especially warm and damp. We'll see how the sulfur dusting performs as the season progresses. This was the second dusting so far this year.

[Now, weeks later (mid-August), I can report that dusting with the sulfur seems to work much better than the spraying. Usually, by this time of the season, the grapes that are most shaded in our little vineyard are already showing some damage from mildew. In bad years, I've lost as much as 20% of the Sangiovese to mildew. Right now there is virtually no mildew on the grapes, which is wonderful.]
Posted by Colin Talcroft at 8:46 AM