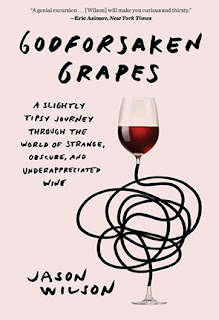 The grapes author Jason Wilson discusses in his Godforsaken Grapes (Abrams Press, 2018) have not been forsaken by god, but by people. Wilson attempts to introduce the reader to some of the more interesting obscure varieties from around the world, but he has room to discuss only a small number. There are said to be as many as 10,000 known grape varieties in the world (although that may actually mean 10,000 known grape names, as many of the common, long-cultivated and widely distributed varieties have numerous synonyms: Pinot Noir apparently has more than 300 used around the world). In contrast, the back-cover blurb of the book suggests there are 1,400 grape varieties in the world, but that number seems far too low. Precisely how many there are probably is impossible to know and any number offered up will depend on choices about what constitutes a distinct variety; the wine grape vine (mostly Vitis vinifera) is notoriously prone to mutation, and where you draw boundaries will necessarily affect the number you end up with.

However many varieties there are, about two dozen of them account for nearly all of the wine made in the world. I would guess that Cabernet Sauvignon, Cabernet Franc, Merlot, Pinot Noir, Syrah, Gamay, Grenache, Carignan, Nebbiolo, Barbera, Sangiovese, Tempranillo, and Zinfandel, among red grapes, and Airén, Trebbiano, Riesling, Chardonnay, Sauvignon Blanc, Chenin Blanc, Pinot Gris, Pinot Blanc, Gewürtraminer, Müller-Thurgau, Silvaner, Viognier, and the Muscat family among whites would account for most of it.

These grapes have dominated the world of wine for different reasons. Some have been cultivated for many centuries and have persisted because of their inherent quality—grapes like Cabernet Sauvignon and Riesling, for example. Others have been widely planted and persisted more because of habit or convenience (they happen to do well in a particular set of difficult conditions) or because they can be consumed in vast quantities in making base wines for distillation—Airén and Trebbiano come to mind. According to online sources, there are about 840,000 acres of Cabernet Sauvignon in the world (the world's most commonly planted wine grape), accounting for about 5% of all grapes planted for wine production. The grape varieties Wilson discusses sometimes exist in a single vineyard of no more than a few acres and nowhere else on Earth. Increasingly, rare varieties and the wine they make, are gaining attention among younger, less tradition-bound sommeliers, Wilson tells us, which has encouraged at least some growers to identify, preserve, and expand plantings of obscure varieties, some on the verge of extinction.

To chronicle all known grape varieties would require a project of encyclopedic proportions.* Wilson is necessarily selective even among the narrowed-down choice presented by grapes that might be considered obscure and forgotten. Any reasonably serious wine drinker will immediately be able to draw up a quick mental list of obscure varieties that don't even get a mention—and not all the grapes he discusses will be unfamiliar to readers with even a casual interest in wine. For example, there is a chapter on Grüner Veltliner, which has become quite trendy in the US of late and is not especially obscure in the areas where it is widely grown, most importantly in Austria and Hungary;  but choices had to be made. Here and in several other places in the book Wilson takes the opportunity to point out how confusing and insane grape naming can be by noting that there is also a Roter Veltliner, a Frühroter Veltliner, and a Brauner Veltliner—none of which are related to Grüner Veltliner at all. And remember those 300-plus synonyms for Pinot Noir.

That said, each of the sections introduces grape varieties that mostly are obscure—Altesse, Diolinoire, Hondarrabi Zuri, Juhfark, Ramisco, Timorasso, and the like—in a kind of travelogue style through accounts of visits to some of the growers and winemakers that nurture such rarities. Along the way, there is a fair amount of discussion about the economics of producing these varieties, particularly about how a comparatively recent obsession with the rare among well-heeled wine drinkers and sommeliers has supported the revival of more than a few. More often than not, however, a respect for place and tradition and a sense of duty to future generations seems to motivate the growers who work to keep little-known wine grape varieties from slipping into oblivion. Reading this book left me grateful, as many of them sound well worth exploring. Recommended.

*One of the most comprehensive attempts, the 1,242-page Wine Grapes: A Complete Guide to 1,368 Vine Varieties, Including their Origins and Flavours, by Jose Vouillamoz, Jancis Robinson, and Julia Harding, as the title suggests, covers less than 1,400.
Posted by Colin Talcroft at 1:21 PM