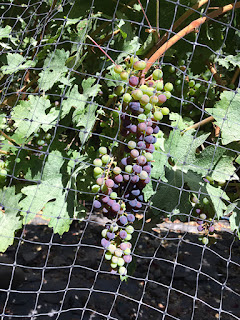 This year, I treated the grapes against mildew by dusting them with sulfur rather than wetting the sulfur powder and spraying them. Now, weeks after applying sulfur dust, I can report that dusting seems to work much better than spraying. Usually, by this time of the season, the grapes that are most shaded in our little vineyard are already showing some damage from mildew. In bad years, I've lost as much as 20% of the Sangiovese to mildew. Right now there is virtually no mildew on the grapes, which is wonderful. Removal of the trees behind the vineyard that were in my neighbor's yard has helped and this year I did not put up the reed fencing on the back fence that we usually have there, so I think they are getting more light and air as well, which helps against the mildew. In any case, the grapes are looking very good.

The berries are just beginning to turn color. I finished netting them against the raccoons yesterday. The next task will be to water them for the first time this season. I typically water at the end of July, the end of August and the end of September, although, I suspect they could be completely dry farmed now. That said, the Sangiovese shows signs of water stress well before the Cabernet. They need a little drink. There's a complication this year. I put down weed cloth under the vines this spring for the first time, to try to make the job of weeding the vineyard easier. It's worked very well, but, now, when I turn on the irrigation, the water mostly beads up on top of the cloth. I'm not confident it's getting into the soil. I'll probably have to go out and cut holes where the drippers drip.
Posted by Colin Talcroft at 10:39 AM