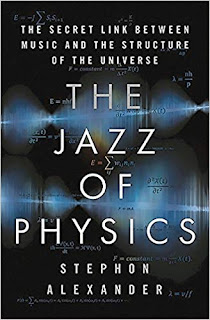 Yet another book about physics that I read with interest but found hard to process. Stephen Alexander's The Jazz of Physics (Basic Books, 2016) is well written and engaging, but I never got the feeling that I was reading a focused argument aimed at supporting the thesis suggested by the subtitle (The Secret Link Between Music and the Structure of the Universe). The book seemed more diffuse than that.

The Jazz of Physics claims to shed light on difficult issues in physics by taking a serious look at the idea that music (broadly defined—in fact, here thought of as vibration) is at the core of the structure of the universe. One of those books that I immediately want to read over again from cover to cover in an effort to really understand, but I suspect I'll never get back to this one as there are so many other books to read.

These paragraphs are intended more as a record of my having read The Jazz of Physics than as something that might properly be called a review. Having said that, anyone with an interest in physics and music would probably enjoy reading this book.
Posted by Colin Talcroft at 9:36 AM