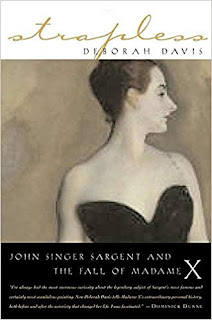 While the focus of Deborah Davis's Strapless (Tarcher/Penguin, 2003) is on the contemporary popular and critical reaction to Sargent's famous painting today known as Portrait of Madame X, there is much here about Sargent the man, his career just before and after the scandal the painting caused, and about the woman who posed for the portrait, one Virginie Amélie Avegno, from New Orleans of Creole descent—later, as a married woman in Paris, Madame Pierre Gautreau—still later, better known as Madame X. 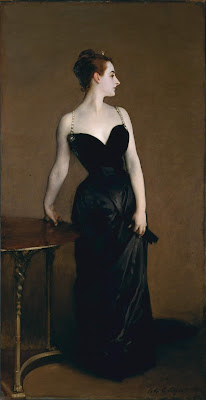 At this remove, it's hard to understand why the fallen strap in Sargent's painting caused such an uproar (oddly, the cover image of the book removes the strap entirely; in the painting, the strap was shown fallen or, later, on the shoulder, having been repainted there by Sargent). As the author points out, at the Salon of 1884, where the painting first appeared publicly, there would have been many nudes on display that ought to have been more controversial, yet these were virtually always in allegorical pieces or the nude figures were sanitized cherubs, nymphs, or other mythical beings. The suggestive strap fallen from the shoulder of Madame X appears to have caused a sensation because it had fallen from the shoulder of an actual person well known in Parisian high society for her unconventional beauty and lifestyle. Given her notoriety, Sargent had calculated that a stunning portrait of Madame Gautreau would attract portrait commissions, but the reception of the painting instead resulted in a temporary setback for Sargent and embarrassment for the sitter who, along with the painting, was mercilessly ridiculed in the press. The finished painting was refused by the sitter's husband and hung in Sargent's studio for decades before he eventually sold it to the Metropolitan Museum of Art, where it resides today.

Sargent called it perhaps the best thing he had ever done when he sold it. I'm not sure about that: Sargent did a lot of fine work, but, needless to say, it's very good indeed. In particular, the line of the arm resting on the table is perfect, it seems to me, its "profile" as arresting as the profile of Madame X herself. Recommended.