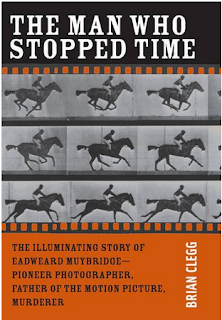 I had known that Eadweard Muybridge emigrated to the US from England and settled in California, that he had had a studio on Montgomery St. in San Francisco, that he started making his famous sequences of animals and people in motion in association with Leyland Standford, and that Muybridge had murdered a man. However, I knew very few details. Brian Clegg's The Man Who Stopped Time (Joseph Henry Press, 2007), subtitled The Illuminating Story of Eadweard Muybridge–Pioneer Photographer, Father of the Motion Picture, Murderer, fills in a lot of those details and adds much else I was unaware of.

The first part of the book focuses on the murder and the trial that followed. Muybridge shot and killed his wife's lover. He made no attempt to escape afterwards or deny that he had done it. He was ultimately acquitted, the jury persuaded by his lawyer who appealed more to moral law than actual law, arguing that what Muybridge had done was understandable. Muybridge appears to have deeply loved his wife and to have been heartbroken.

In detailing Muybridge's work for Stanford at Palo Alto, on mostly empty land that would later become the Stanford University campus, we get the story of how a track was laid out with banks of cameras that used electrically activated shutters to stop motion, and a look at Muybridge the entrepreneur later tourning the country with his photographs and a complex mechanism, the zoöpraxiscope for projecting a series of them in quick succession to create what were the first moving pictures, even if what we today think of as movies relied on a strip of celluloid for projecting images in series. Author Clegg makes a strong case for Muybridge as the father of the motion picture, pointing out that his work pre-dates Edison's and that Muybridge essentially was operating the first commercial motion picture theater at the Chicago World's Columbian Exposition of 1893, even if his "movies" were very short by today's standards. He suggests that Edison's talent for self-promotion has played a large role in creating the impression that Edison made the first moving pictures. There is much, too, about Muybridge's later work at the University of Pennsylvania doing more extensive motion photography with improved techniques; and the bulk of the photos we know today of animals and people in motion were made in Pennsylvania, not in California for Stanford.

Unexpectedly, The Man Who Stopped Time almost incidentally provides one of the best overviews of the history of the development of still photography I've ever read in the course of explaining Muybridge's work. The book was worth reading just for that. But, as I say, this book has many merits: It touches on Muybridge's roots in England, his work as a still photographer and as a photographer of motion, the above-mentioned history of still photography technology, on Muybridge's trial for murder and the incident itself, on the stage coach accident that nearly killed Muybridge, and on Muybridge's falling out with Stanford, his financial troubles, and how Muybridge's reputation became unfairly sullied by confusion about his central role in the creation of the motion photographs and the tools and techniques used to make them, mostly reflecting jealousy and misinformation. Recommended.
Posted by Colin Talcroft at 11:40 AM