Books I'm Reading: The Lives of the Great Composers 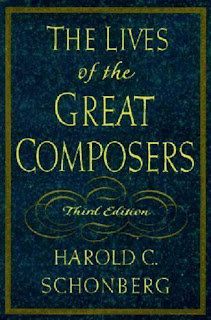 I've been reading Schonberg's The Lives of the Great Composers (Third Edition, Norton 1995). Very interesting for its perspectives on the most important composers and their music. I like that it's forced me to read about genres and styles I may not know well or listen to much.  The Magic Flute is the only opera I really love, but I've been reading a great deal about opera, to take just one example. I didn't know that Wagner was the arrogant, completely self-absorbed narcissist he seems to have been, or that Richard Strauss was henpecked.

The book has opened my eyes to some composers I now think may deserve more of my time and confirmed my opinions about others (not that Schonberg is the last word, but he seems to know what he's talking about). I was up to Les Six and the modern French composers when I started writing these notes, I've since finished the book. There have been some surprises. I had no idea, for example, that Berlioz was such an interesting character. He seems to have been a bit crazy but a superb writer about music and about other composers and their work.

The author has much to say about the differences between Mahler and Bruckner that are quite amusing, pointing out that the latter was a deeply spiritual man and suggesting you have to be equally spiritual to really get Bruckner. The author has a great deal of sympathy for those who find Bruckner boring while acknowledging that he can be worth the time. He calls Mahler a whiner and a peevish child, essentially, who reveled in his agony and couldn't stop asking BIG questions about life. He suggests that Mahler and Bruckner wondered about the same sorts of things, the main difference being that Bruckner was sure of the answers to his questions while Mahler never found an answer that satisfied him.

The author has a very high opinion of Debussy as a modernist (calling Mahler the end of Romanticism rather than a forward-looking revolutionary and Debussy the real revolutionary at the end of the 19th century and the start of the 20th) and has a surprisingly low opinion of Sibelius. Perhaps Sibelius was at a low point in general esteem in 1995, I thought, but I've since found that the first edition of this book, published in 1970, said the same thing. Schonberg also doesn't think that much of Richard Strauss, or at least argues that Strauss peaked very early and that his later works are rather dull, something I tend to agree with, although, because my father was a fan I have a big collection of Richard Strauss discs that I keep trying to like more than I actually do.

Not being a pianist or that familiar with the technical aspects of piano playing, there's much in this book about performance style that has made we want to pull out all kinds of records and CDs and listen for the things he mentions. For example, he talks about Chopin being among the first to write music for keyboard that requires use of the pedals in a way that was entirely new (and suggests along the way that many modern pianists completely miss the point of much of the music of Chopin) and he talks about Debussy's piano music being music that has to be played as if the piano is not a percussion instrument at all--as if the fingers are working directly on the strings.