I've recently finished two very long books, History of Beauty (Rizzoli International Publications, 2004), edited by Umberto Eco, at 230 pages (there is a lot of very small print), and John Colville's The Fringes of Power (W. W. Norton, 1985), subtitled "10 Downing Street Diaries 1939-1955," at 725 pages of main text (with another 70 pages of biographical notes and a glossary). 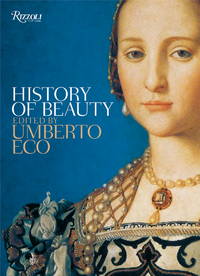 Eco edited History of Beauty, which is a collection of short essays on ideas about beauty through history, each illustrated with numerous color plates and supplemented by excerpts from contemporary writing. He begins with a chapter headed "The Aesthetic Ideal in Ancient Greece" and ends with one called The Beauty of the Media" that looks at how film, TV, and advertising have influenced ideas about beauty. Some sections are thematic, some focus on movements in art. The reader is mostly left to draw his or her own conclusions about what beauty means from the broad survey of examples presented. Beautifully illustrated and a pleasure to look at, but at times the very small print and lack of any central thesis made a straight read-through a bit tedious. Having said that, the various sections of the book could be read in virtually any order. Worth the time, but perhaps best considered a reference book. 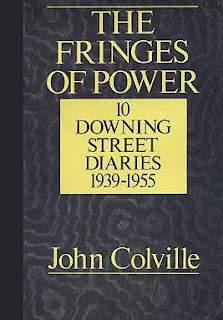 The Fringes of Power, too, is a bit disjointed, but, being mainly a diary, that's perhaps to be expected. It begins with the author finding himself "twenty-four years old, a Third Secretary in the Diplomatic Service of two years' standing" and thinking at the outbreak of WWII in 1939 that it might be best to resign from the foreign service before his job became what was called a "reserved occupation" from which it would become impossible to exit before the end of the war. He decides to stay on and notes in his preface "Unsure of what was going to happen, I decided to keep a diary." Not long after the start of hostilities, he is seconded to 10 Downing Street from the Foreign Office and for the entire duration of the war (and beyond) he acts as Winston Churchill's private secretary.

Colville describes himself, again in the preface, thus: "...the money saved by my parents' carefulness (which never verged on meanness) went on providing their three sons with the best and most expensive education available; and though they were far from being cadgers, they had enough devoted friends and relations to provide their children with pheasants to shoot, horses to ride, yachts in which to race and pleasant country houses in which to stay.

"Thus in 1936, when I came down from Trinity College, at the age of twenty-one, I had not been stinted of pleasures and had even, in the days when travel was still an adventure, been to the Soviet Union, steamed down the Danube in a barge, crossed Asia Minor in a third-class railway carriage, spent ten days as a guest in the monasteries of Mount Athos and learned to speak both French and German with fluency. I had also won two scholarships. However, I was well aware that I must soon earn my living with greater urgency than some of my university friends."

While Colville did not come from great wealth, perhaps, his family was comfortable and with numerous connections to people of the upper classes. While at times he sounds a trifle snobbish (particularly to an American) his is the perspective of a man with the kind of education and breeding that it might be nice to see in people in public service again, and some of the most interesting comments he makes are about the US generals and politicians he and Churchill work with when dealing with the United States, particularly later in the war. The Americans, if not laughed at, are generally regarded as sincere but poorly educated and naive.

There is much of interest here about Churchill the man—his quirky habits, in particular—and about the workings of Parliament. The deep respect for and expectation of fine oratory in the House of Commons obvious in the time and effort Churchill and the author put into speech writing will probably seem alien to those of us used to US politicians and, especially today, when we are led (if that's the right word) by a man who is obviously both of limited mental capacity and limited education. If Eisenhower seemed sincere but poorly informed to Colville, how would he have characterized a Mr. Trump?

Some of the diary will sound like gossip—Colville rarely misses an opportunity to comment on the beauty, charm, or intelligence (or the lack of any of these) of the women he meets or on the effectiveness (or lack of it) of the politicians he works with. There is quite a bit about behind-the-scenes maneuvering among the politicians of the day. The coverage is uneven, and there are some startling omissions. For example, while there is a great deal of comment on Churchill's efforts to push Roosevelt into providing Britain with more aid in the early stages of the war,  the attack on Pearl Harbor that finally precipitated US war participation is not even mentioned. The atomic bomb is barely noted. That said, a very interesting and entertaining read, not least because of the writer's excellent writing style, a product, no doubt, of that expensive education. Recommended.
Posted by Colin Talcroft at 4:04 PM