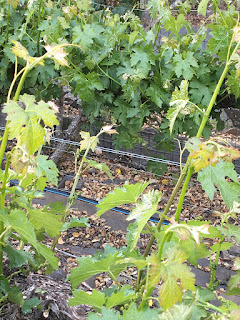 Working on shoot thinning in the vineyard this week. It's a bit overdue. It's easier to do when the shoots are shorter than they already are, but it's not too late. Next chore will be to dust the shoots with sulfur, which prevents mildew later in the season. I'm hoping that this year smoke from wildfires won't taint the wine, making all the work a waste. I've had to pour out the entirety of the Cabernet from 2020. Only the 2020 rosé (which we make from our Sangiovese grapes) proved drinkable. In the photo, the row of vines in the foreground has been thinned, the row behind will get thinned tomorrow.
Posted by Colin Talcroft at 8:35 PM