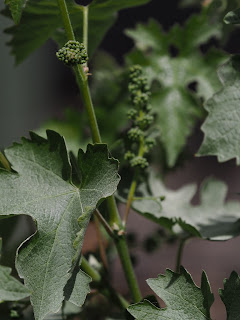 In the past week, I've dusted our little vineyard with sulfur as a preventative against mildew later in the season. I waited too long, as usual. The first application is best done when the shoots are about six inches long, but many were already two to three times that length. I think the plants will be fine though, as they're getting much more light and air than in the recent past, as my neighbor has removed a number of small trees behind the vineyard that were creating shade. Also, I've switched to dusting with powdered sulfur rather than suspending the powder in water and spraying the vines, which seems to cover better and to be more effective. It's also much easier to do.

I'm hoping that wildfires won't be an issue this year, but the winter of 2020-2021 was one of the driest on record. While that is good for suppressing mildew, it doesn't bode well for fires in the area.

In the entryway to the house, 12 gallons of Cabernet Sauvignon/Cabernet Franc from 2020 still sits, neglected, in large glass containers. I had given up on it. It had an off smell and taste caused by the smoke and the ash that dusted the vines at the end of the season. After doing some research, I decided the only way to save it might be to have it distilled into brandy, but the companies I called said the smallest batch they do is 200 gallons. I had given up on it but had been able to bring myself to dump it out. And so it has been sitting and still it sits. But, yesterday, I tasted it it for the first time in a couple of months (it should have been racked and sulfited already many weeks ago), and, strangely, the taint seems to be gone..... Perhaps it will be worth taking to completion after all?

Posted by Colin Talcroft at 9:17 PM