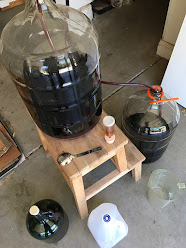 For many reasons that I need not enumerate, 2020 was a challenging year. On the wine front, wildfires that left our little vineyard covered in ash and shrouded for several days in dense smoke, were the primary challenge. Many local commercial vineyards chose to abandon their grapes on the vine when testing suggested wine made from them would be tainted.

I don't understand the chemistry exactly, but it appears that grapes absorb smoke through their skins (and more easily the closer the smoke exposure is to harvest). That exposure can lead to the presence in the grapes (and any wine made from them) of volatile phenols that we perceive as off flavors and scents (I understand the main culprits are free guaiacol and 4-methylguaiacol).

I went ahead and harvested our grapes and made wine from them. The Sangiovese, as usual, I made into rosé, thinking that the short time rosé wines spend on the skins during the winemaking process would reduce any smoke effects. The resulting wine is a bit more pungent than usual, but quite drinkable. The Cabernet, on the other hand, smelled funky from the outset and sampling the young wine suggested it was beyond hope. As a result, I neglected it. I couldn't quite bring myself to dump it out, although I had resolved to do just that. Time went on. It sat in its containers, on the lees, until last week without racking. Normally it would have been racked into clean containers, treated lightly with sulfites, and I would have added oak staves sometime around December or January, after malolactic fermentation finished. 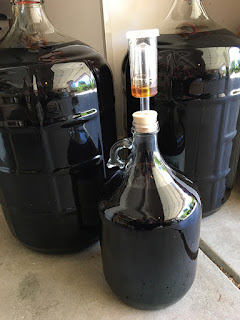 I smelled and tasted it last week for the first time in a couple of months, still intending to dump it. Surprisingly, it smells and tastes quite normal now. The taint appears to be gone. Anecdotal evidence is all over the place. I've heard stories about this happening (the taint disappearing) but also stories about taint suddenly appearing in a wine that at first seemed unaffected. Who knows? Anyway, I decided to rack it, sulfite it, add oak staves, and let it go to completion. I'll check it again at the next racking. If it seems stable, I'll bottle it sometime in the autumn and we'll see how it holds up. Eleven gallons of Cabernet Sauvignon/Cabernet Franc are now resting in the garage.