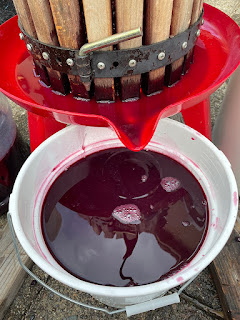 Spent much of yesterday and today (October 31) pressing this year's wine (Cabernet Sauvignon/Cabernet Franc) from the backyard vines. I made two batches this year, one using French Red yeast, one using Rockpile yeast, just for variety. I pressed about 10 gallons of must each, 20 gallons in total, which yielded seven gallons of new wine from each of the two batches. Fourteen gallons of wine will make about 70 bottles. As the grapes were harvested on October 5 and the yeast went in on October 7, fermentation took 24 days--which is about the longest it's ever gone. That reflects the fact that it has been consistently cool and mostly overcast since harvest. The wine was in a cool garage the whole time. In a typical year fermentation takes from 10 to 16 days. The rosé (from our Sangiovese vines) has been even slower. I probably won't rack and sulfite the Sangiovese for a couple of more days still. Next step for the red wines, malolactic fermentation.*

I learned a new way to test for total acidity this season--a test I've never bothered with in the past because titrating using phenolphthalein solution and trying to judge the color change as it goes from acid to basic (remember your high school chemistry?) is really, really hard because of the color of the wine. This method uses a pH meter (which I already had) and a sodium hydroxide solution to find the TA value--no need to judge a tricky color change in a highly pigmented solution. You just read values off the meter as they change. The French Red batch had a pH of 3.37 and a TA of .75. The Rockpile batch had a pH of 3.45 and a TA of .765. The total acidity value is on the high side for a red wine, but, having never tested our wine for TA before (this is our 18th vintage), I have no idea whether that's normal for us or not. According to the textbooks, it should be adjusted down slightly, but I may leave it. Time to do some further research....

[Edit: *I racked and sulfited the Sangiovese rosé on November 4, as the hydrometer showed a specific gravity of 1.000. That means the rosé fermentation took 28 days, which is longer than it ever has before by a wide margin. I tested the TA and it was quite low—.585, which would be more appropriate for a red wine. I've never had to adjust the acidity of any of the wines I've made before, but this year was different for at least two reasons. First, because of the drought, I did not water the vines at all this year. Dry farming the vines has always been my goal and I was going to attempt it this year anyway. The Sangiovese suffered a little. There were more raisins than usual and the grapes probably should have been picked a little sooner. Second, the brix was notably higher than usual. In the past I've had to chaptalize the must (adding corn sugar to bump up the sweetness of the juice and hence the alcohol level in the finished wine), but this year the grapes did not need a boost. The result was low acidity. I added 20g of tartaric acid dissolved in distilled water to three gallons of racked wine, which, assuming my calculations are correct, should raise the TA to .785, which is just right for a rosé. It takes 3.4g of tartaric acid/gallon to raise TA 0.1%.

I inoculated the red wines with the malolactic starter on November 2. Malolactic fermentation can take anywhere from about three weeks to about three months. It can be a bit mysterious. The only reliable way to tell whether it's finished is to do a paper chromatography test, which involves the use of very smelly chemicals, so I usually just let it go and hope for the best.]

Posted by Colin Talcroft at 5:14 PM