Music I'm Listening To: San Francisco Symphony, November 12, 2021—MTT back on the podium 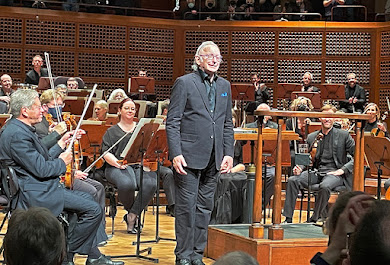 Michael Tilson Thomas underwent surgery for a brain tumor in early August. I guess it wasn't too bad as brain tumors go, as he was back last night for the first time since the surgery (and the pandemic break) after only three months. He got a prolonged standing ovation as he first walked on stage. I've never particularly liked him as a conductor and so have usually avoided seeing him by choosing the subscription options that are mostly guest conductors, but he is loved by San Francisco and clearly everyone was glad to see him back again, perhaps particularly because the pandemic made it impossible to give him a formal public send-off as he handed over direction of the Symphony to Esa-Pekka Salonen. He appeared moved by the reception. He looked a bit frail and has gained weight since last time I saw him, but he seemed reasonably well. He conducted a set of Mozart German dances, a piece of his own composition featuring flutist DeMarre McGill (I didn't know that he composed), and, after intermission, Schumann's Symphony No. 1.

When you subscribe, you have to buy a block of at least six concerts that come in a series. Once they've sent you your tickets, you can call in and swap out ones you don't like for something you prefer, then they send you the new tickets and you destroy the replaced ones. I've been a subscriber for about 12 years and never had any trouble doing this, but last night when they scanned our tickets they were rejected. I had to go to the box office to enquire. It turns out we had swapped out last night's tickets (avoiding MTT!) and replaced them with something else but I hadn't destroyed the old tickets. So, in fact, we did NOT have tickets to the concert last night. I was prepared to buy a pair (as we had driven an hour to get to the concert hall and were prepared for an evening of music) but the box office guy just laughed it off and gave us a free pair, which was very nice of him. With the pandemic situation, the concerts are only about two-thirds full, so there were plenty of seats and, as I say, we're long-time subscribers, but he didn't have to do that. 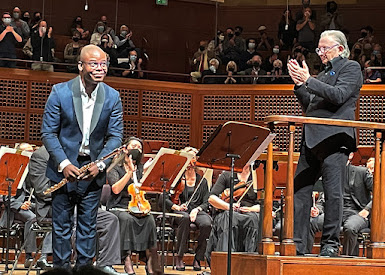 At dinner, after the concert, we went to Monsieur Benjamin, a French restaurant near Davies Symphony Hall (good, but expensive). Because it's expensive, it has never been our usual after-concert restaurant, but, because of the pandemic situation, many restaurants are closing their kitchens too early to get to after a concert and there are fewer choices now. Last time I was there was several years ago after a recital with Jean-Yves Thibaudet and Gautier Capuçon. Just before we left that night, we noticed that Thibaudet and Capuçon had been in the restaurant the whole time. We didn't bother them. We were reminiscing about that last night and just after talking about it we realized that McGill was sitting three tables down from us. I guess it's the place musicians go after the concerts. This time, we DID bother the performer. We greeted him and told him we enjoyed the concert. He was very friendly and seemed genuinely pleased that we had come over to say hello. Very gracious--enthusiastic even. Despite the ticket mistake, everything turned out well.
Posted by Colin Talcroft at 10:08 AM