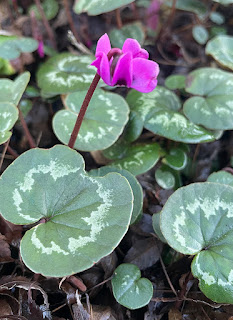 I note here a little belatedly that Cyclamen coum was the first plant in the garden to bloom this year, as it is in most years. The first couple of flowers opened this year on January 7, which is typical. Cyclamen coum normally blooms in the first week of January, occasionally in the last week of December. Also blooming in the garden right now is the pink flowering plum at the front of the house. The first flowers opened on January 10 or so, although, strictly speaking, I missed their first day.
Posted by Colin Talcroft at 10:55 AM