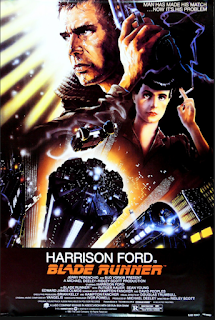 I generally avoid movies and TV shows that are relentlessly hyped and talked about in the media (I'm the guy who saw the first episode of 'Breaking Bad' the day the final episode aired). As a result, despite being a fan of movies in general, there are quite a few famous films I've never seen. These excessively promoted flicks are often a big disappointment, I find, so I shy away from them. For example, I didn't see any of the Godfather movies until about 2005 (the first two, against the trend, were not disappointments, and, for the record, I binge-watched 'Breaking Bad' in about two weeks). That said, I've still never seen 'Midnight Cowboy', 'Apocalypse Now', 'The Deer Hunter', any of the Star Wars films, 'Titanic', any of the Tolkein adaptations, 'Blade Runner', and on and on (as Kurt Vonnegut used to say).

Last night, however, 'Blade Runner' was on Netflix, so I gave it a shot. I have to say, I don't understand why so many people seem to think this is a great film. First, this is supposed to be Los Angeles. Why is it raining all the time? Second, this is supposed to be Los Angeles. Why are all the stores advertising themselves in Japanese? Third, why are half the inhabitants Japanese and Chinese? Fourth, if, the job of the burnt-out cop, Rick Deckard, the Harrison Ford character, is to kill replicants, as we are told, why doesn't he eliminate the Rachel character immediately? Is he smitten? Does he see something different in her? If so, the director has failed to explain to us what makes it easy for him to 'retire' the other female replicant but not Rachel. It is suggested that she is a newer version that has been given manufactured memories and that she herself is unsure about whether she is a replicant, but never is Deckard's motivation made clear.

So, she's pretty. He's attracted to her--presumably so strongly that he's willing to rebel--but we don't even get a good sex scene to make clear his desire for her (working here on the assumption that replicants are so human-like that they can have sex, even if it's non-reproductive sex).

Aside from that, while the acting is not notably bad, in my view, it's notably notable either. In short, I don't see why this has the following that it seems to have--I don't understand why I've been hearing about it over and over for so many years. When it was first released, I lived in Tokyo (1982). I remember seeing a billboard for the movie being painted to the right side of the entrance to Shinjuku Station (East Exit) back when real people still painted movie billboards by hand in Japan when a film was first released. Apparently, there are different versions made subsequently, though. I saw the 'Final Cut'.

I haven't read the story the film is based on. Given the reputation of Philip K. Dick and, having read (and enjoyed) 'The Man in the High Tower', I suspect it worked better on the printed page than as an adaption. In short, I don't get it....

Posted by Colin Talcroft at 9:11 PM