On the Road: Pueblo to Grand Junction, Colorado (Summer 2009) 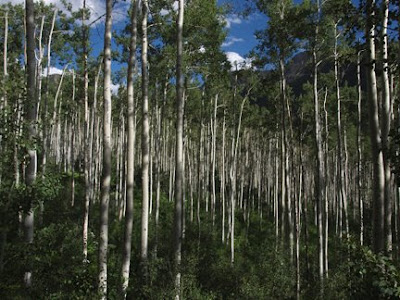 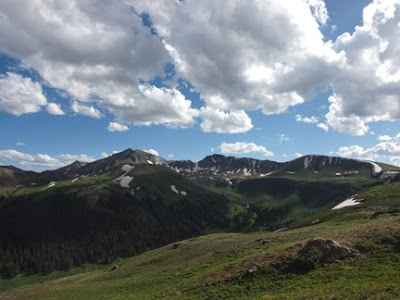 Crossed the Rockies today, from Pueblo to Grand Junction, by way of Independence Pass--a very pretty route recommended to me by my waitress at lunch, at Twisted Cork Café, in Salida, which has a pretty historic core. The cafe had been recommended by the people at a winery I pulled into on the spur of the moment as I was leaving Pueblo. The café turned out to be quite good.

Clearly, serious wine is being made in Colorado. Most of the grapes appear to come from the area around Palisade, just east of Grand Junction. I tasted a good Cabernet. Here they have the great advantage of being able to grow vinifera grapes, rather than the hybrids wineries are forced to use in places like Missouri. Twisted Cork Cafe is itself associated with a winery. I tasted their wines as well. Again, solid, including an interesting raspberry-flavored Merlot. Sounds odd, but it was surprisingly good--a merlot with 10% raspberry wine blended in. Not my thing really, but I'm glad I tried it.

The road took me north, through Aspen, which turns out to be a smaller town than I imagined--clearly a ski resort. It has the look of places like Whistler. The aspens along the road approaching the town were beautiful. I stopped along a marshy area to look for birds, but saw only chickadees. I HEARD a lot of birds. That has been a frustrating pattern on the return leg of my trip from California to Ohio. Maybe I just got very lucky on the way out. Birds were everywhere. Lately, I can't seem to see any.

Independence Pass takes you over the continental divide at 12,095 feet. It was hard to breathe at that altitude and I experienced the headache and ringing in the ears I know from skiing at high elevations. The car was having trouble, too--very little acceleration. The thin air made me dizzy, but the wildflowers were beautiful. It was refreshing to see a variety of plants again after the endless corn and roadside weeds of Kansas. The terrain on I-70 at the end of the day, between Rifle and Grand Junction was right out of an old western--banded rocky tablelands and canyons.
Posted by Colin Talcroft at 9:51 PM