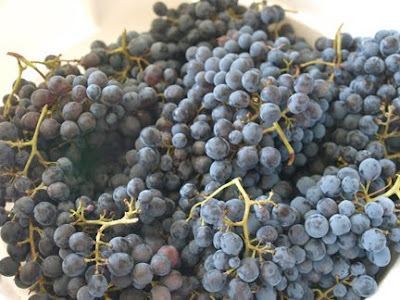 The Cabernet must tested at 24.8 Brix with a pH of 3.91--on the high side--and total acidity of .051, which is on the low side. I may have to do some adjustments later. The sugar spiked over the weekend. Sulfited the must to 72ppm, which is rather more than usual because of the high pH. 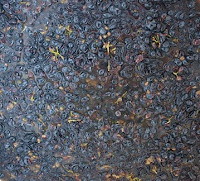 The Sangiovese must tested at 21.0 Brix (1.086 by the hydrometer) with a pH of 3.70. Total acidity was again somewhat low, at 0.50. Sulfited to about 50ppm. I've decided to make all the Sangiovese into rosé again this year, as it's so nice to have new wine at Thanksgiving. I will try to keep the temperature down more, to extend the fermentation a bit, as the winemaker at Wellington suggested that would improve the freshness. I'll be pressing the Sangiovese first thing in the morning tomorrow, after taking my son to school. The upper photo shows Sangiovese grapes, just picked. The lower shows the crushed Cabernet grapes, ready to be inoculated with yeast.
Posted by Colin Talcroft at 9:47 PM