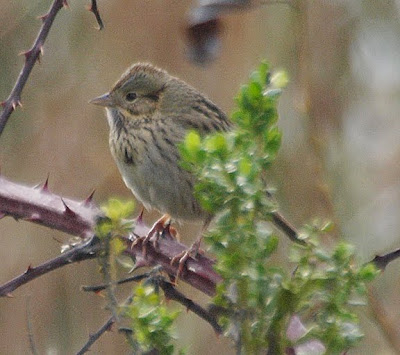 Having heard of it only yesterday for the first time, I took a quick drive today to Nagasawa Park, in Fountain Grove, Santa Rosa (a new Santa Rosa city park--formerly known to locals as Fountain Grove Park, entrance off Fountain Grove Parkway). There is quite a diversity of habitat. There is a substantial lake with a central island. Some of the edges are deep with reeds. Around the lake are some dense patches of oaks and there is a lot of open area with grasses, coyote bush, and other brush--good sparrow habitat. One edge of the lake has a stand of small deciduous trees with reeds below that turned out to have a particularly large number of birds. There is ample parking.

The downside is that you can walk only about a third of the way along the lake shore in one direction and even less in the other. If you take the trail that heads out to the left from the parking lot, you eventually come to a fence that has been neatly cut and tied back, so it's easy enough to get through, but to complete a circuit of the lake, you have to follow golf cart paths through the golf course on the far side of the lake, and I had to exit by scaling the fence at the far side, but there there is an obliging tree that someone has propped a big limb against to form a sort of ladder. I hadn't intended to trespass. It's a shame that you can't walk all the way around without doing so, but I ran into some Santa Rosa city workers who said they were negotiating to eventually make a complete walk possible without going onto private property. Anyway, this seems to be a well-kept secret (or maybe it's just me). It's like a scaled down Spring Lake. Well worth a visit. 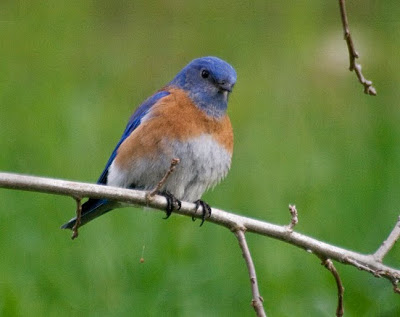