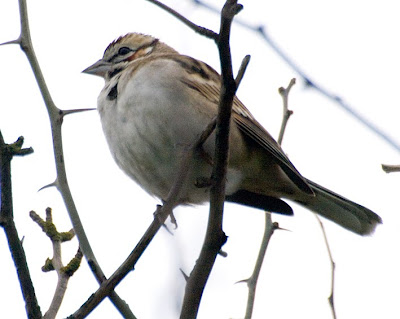 Just to report a chilly but rewarding trip to the Sacramento area with some local birders yesterday. Saw an amazing 72 species during the day and saw six species for the first time in my life--not to mention two others that I had seen before but never well enough that I felt I should consider them real sightings. The route was up I-80 to Highway 160 through Isleton, Walnut Grove, and Thornton, and then to the Cosumnes River Preserve. On the way back, we passed a spot known recently for mountain plovers and a burrowing owl. We found the burrowing owl, but not the plovers.
First-time sightings for me were: Ross's goose, Lincoln's sparrow, loggerhead shrike, borrowing owl, lark sparrow, and horned lark. I added the sandhill crane and ferruginous hawk, to my list as well, because I got to see these birds well for the first time.
Other birds observed were: Downy woodpecker, Nuttal's woodpecker, belted kingfisher, Say's phoebe, black phoebe, mallard, black-necked stilt, yellow-rumped warbler, ruddy duck, ring-necked duck, violet-green swallow, bufflehead, marsh wren, snow goose, yellow-billed magpie, turkey vulture, ruby-crowned kinglet, golden-crowned kinglet, kestrel, red-tailed hawk, canvasback, Brewer's blackbird, red-winged blackbird, house finch, California towhee, northern shoveler, killdeer, coots, tree swallow, least sandpiper, Wilson's snipe, dunlin, northern harrier, European starling, robins, Anna's hummingbird, bushtits, cinnamon teal, green-winged teal, golden-crowned sparrow, white-crowned sparrow, American pipit, spotted towhee, tundra swan (thousands), Canada goose, cackling goose (the leucoparia and Aleutian races), northern pintail, wood duck, greater white-fronted goose, American wigeon, gadwall, common goldeneye, great blue heron, long-billed dowitcher, and greater yellowlegs. Other group members saw about six species I missed, including a golden eagle.
The whether was dark and dreary--heavy overcast. As a result, I didn't get any good pictures. Posted here is the shot I was able to get of one of the lark sparrows. This photo does not do justice to so pretty a bird.
Posted by Colin Talcroft at 11:40 PM