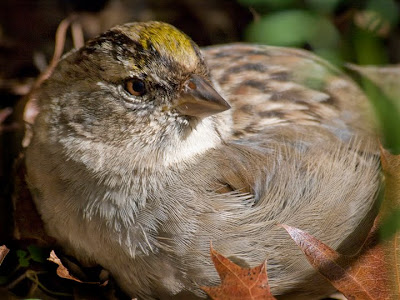 On a walk around Lake Ralphine (at Howarth Park, Santa Rosa) and Spring Lake today I saw nothing much unusual except the spotted sandpiper that's been hanging out on the east side of Lake Ralphine, but I was able to get an extraordinary photograph of a golden-crowned sparrow (above). The bird virtually walked up to me and sat at my feet. Who knows why? At first I thought it was sitting on a nest, but I don't think these sparrows are ground nesters. It was as if the bird simply wanted companionship. It reminded me of a cat curling up to sleep in a comfortable spot. From about six feet away, it allowed me to take photographs for several minutes, not stirring until I stood up to leave. It flew off to join several companions foraging in the nearby bushes.

On Friday (March 12) I spent about 40 minutes at Place-to-Play Park, in Santa Rosa. Some long-time birdwatchers in the area rightly lament that the park today is just a remnant of what used to be a much more extensive wild area, but it continues to attract a lot of birds. On a short walk covering a distance of only a few hundred yards (once around the small lake) I saw: Red-shouldered hawk, crows, common merganser, killdeer, double-crested cormorant, snowy egret, bufflehead, ruddy duck, black phoebe, yellow-rumped warbler, bushtits, California towhee, coots, turkey vulture, scrub jay, Canada geese, house finches, robin, golden-crowned sparrow, white-crowned sparrow, Nuttall's woodpecker, mourning doves, pied-billed grebe, and a Northern mockingbird. I also saw a warbler I was unable to identify--mostly yellow and pale gray with a distinct white eye ring. Twenty-five species in total, which is nearly as many as I saw at Lake Ralphine and Spring Lake--in a much smaller area and covering a much shorter distance.
Posted by Colin Talcroft at 6:33 PM