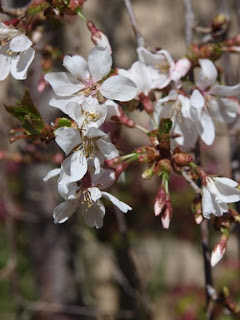 First blossoms today on the "Snow Fountain" weeping cherry on the side of the house. Warmer weather has coaxed out just a few flowers, but soon the entire tree will be covered in white. In 2009, the plant bloomed on March 23. Thus, a year according to this plant was 356 days. 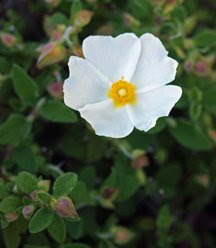 A single blossom opened on one of the prostrate rock roses (Cistus salivifolius) today as well. That seems very early. Only one bud has opened. Most of the buds don't even look fully formed. I suspect it will be several weeks before this plant is really in bloom, but, for the purposes of my botanical calendar, I record the first blossom today. The plant bloomed on April 2 in 2009. A year according to this plant was thus 346 days.
Posted by Colin Talcroft at 9:57 PM