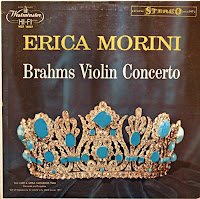 Having just heard the Lazic piano transcription of the Brahms Violin Concerto (see my recent post on the subject), I listened today to a few of the records I have of the piece (yes, vinyl)--such as the Erica Morini recording on Westminster (WST 14037) pictured here and a Jascha Heifetz recording (RCA Red Seal LM-1903). Neither is dated, but I'm guessing the Morini is from about 1959--in my experience, the threshold year for modern sound; it's in stereo and it sounds quite full--and that the Heifetz recording is probably a few years older. I found dates on various websites that put them in that period, but couldn't find anything definitive. I was surprised to find auction results for the Morini recording at more than $100. This is one of many records I bought for a dollar or two at the used record stores in Columbus, Ohio in the early 1980s. Remember Mole's Records on High Street? (I think it was above Bernie's Bagels.) The Morini recording is from one of the stranger periods in LP cover design--when it was fashionable to adorn record jackets with photographs of objects that had little or no relationship to the music. Photographs of the performers must have been considered immodest at the time. 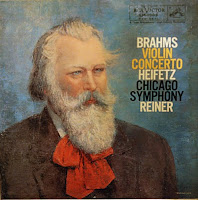 I had come back from a year in Japan not long before I bought this record. I had become a regular drinker of ice coffee, which was (and is) extremely popular in Japan, but the idea hadn't made much headway in Columbus yet; I had to teach the people at Bernie's how to make ice coffee by pouring hot coffee over a knife blade (to help dissipate the heat) and into a large glass of ice. Things have changed a bit since then. I still have trouble grasping the fact that 1980 is 30 years ago.
But I digress. I still like both recordings, and it's almost fun now to have to turn the record over somewhere in the middle. I even find the occasional scratches and pops somehow comforting, although I despised the distraction in the days before CDs, when a perfectly noiseless recording was virtually impossible. Now that it is possible, the noise on old records doesn't bother me any more.
Reading the liner notes to the Westminster release there was one interesting tidbit: The Violin Concerto, in three movements, was originally conceived in four, but Brahms threw out the two short middle movements he originally wrote and replaced them with the Adagio we now know as the middle movement. The liner essay (by Irving Kolodin) notes that parts of the discarded movements were later used in the second piano concerto Brahms wrote. Lazic's idea of converting the violin solo into a piano solo begins to seem less far fetched than it did at first.

Last time I heard anything about Erica Morini it was news that her beloved violin, the "Davidoff" Stradivarius (1727), had been stolen shortly before she died in 2005, at the age of 91. I wonder if they ever recovered it?

[Update: I did a little searching. As far as I can tell, the violin is still missing, but I notice that it's now referred to as the "Davidoff-Morini." That seems fitting; she owned it for nearly 75 years.]
Posted by Colin Talcroft at 11:29 PM