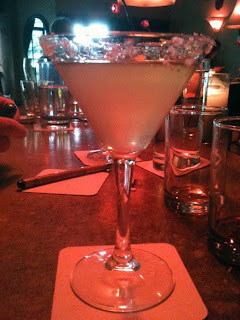 The cocktail I invented one day last year, inspired by Mad Men, has made its official debut, at the Zig Zag Café, in Seattle, mixed by the Zig Zag's Master Bartender, Murray Stenson, my recipe having been delivered to him by hand last night by Louis Broome, Seattle playwright of note, and my first-ever college roommate. Facebook had a hand in organizing the debut: I met up with Louis again only a few months ago (via Facebook) for the first time since 1979 and learned that he had become a cocktail enthusiast in the interim. Louis went way out of his way to get it right, stopping off to pick up some pink Murray River flake salt and a Meyer lemon to be sure all the proper ingredients were available. Thanks Louis!

I call it a Sonoma Dry Sour. I won't divulge the recipe here, but if you have a favorite bartender, let me know.  I'll send the recipe to any bar you name if you agree to order it there and give it a try (and tell me what you think--even if you don't like it). Or you can hand deliver the recipe, as Louis did. Surely you know an artist at the bar in your fine city that might like to add it to their repertoire? Feel free to pass this post on to any of your friends that appreciate cocktails or link to it from any appropriate site. This is partly an experiment in tracking the dissemination of the recipe.