I joined a group of birders from the Madrone Audubon Society today on a trip to Solano County, mostly along Putah Creek, near Lake Solano Campground. The group was hoping to find the pygmy owls that have been reported in the area recently, and I was hoping to see an American Dipper and a Lewis's Woodpecker, but no luck with any of these birds. I did get a new bird, however, a Phainopepla--a rather drab female, but a new bird nevertheless. Other highlights included good views of a green heron, good views of Hermit Thrushes, good views of Wood Ducks, a Pileated Woodpecker sighting, an immature Golden Eagle, two active Bushtit nests, Common Goldeneyes engaged in courtship behavior, and two rather oddly colored birds--one a Canada Goose that looked like it had some Greater White-fronted Goose in it and a male Bufflehead that looked like a first-year male (broad white strip at the bottom of the area that is usually white rather than a full white bonnet) but with the top of the bonnet beginning to turn white; the upper part of the head where normally white was a dappled gray. 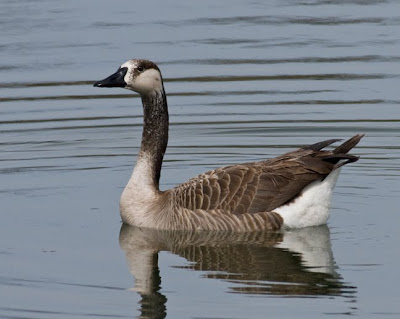 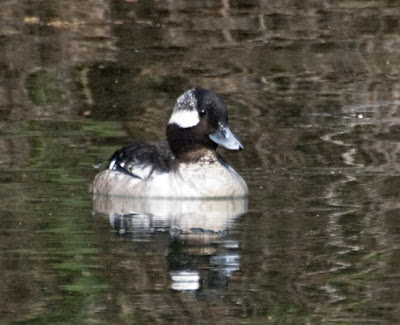 At the spot marked as Fishing Access No. 2, we saw: A large group of Common Goldeneyes engaging in courtship behavior (the males bending their necks back, touching their backs, and then thrusting their necks forward), Buffleheads, Double-crested Cormorant, Yellow-rumped Warblers, Bushtits, California Towhee, Orange-crowned Warblers, Downy Woodpecker, Wood Ducks, Scrub Jays, and Mallards. Heard Nuttall's Woodpecker and a Wrentit. The immature Golden Eagle was at Fishing Access No. 3. (The Golden Eagle, Orange-crowned Warblers, California Towhee, and Wrentit brought the group total to 50.) All in all, a good day.

The photos show the two oddly-colored birds. The "Canada Goose" (upper photo) and the Bufflehead (lower photo) are pictured.
Posted by Colin Talcroft at 6:32 PM