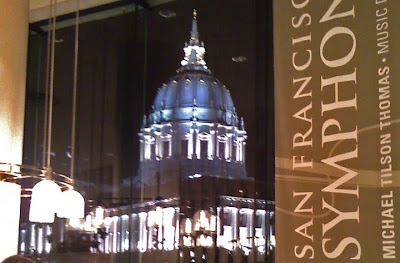 I heard a very enjoyable concert last night at Davies Symphony Hall in San Francisco. Christoph Eschenbach conducted the last of 23 concerts in a US tour by the Schleswig-Holstein Festival Orchestra in Beethoven's Leonore Overture No. 3, Mozart's Piano Concerto No. 17, Prokofieff's Symyhony No. 1, and Beethoven's Piano Concerto No. 1. The soloist in both concertos was Lang Lang.

The audience got a treat after the published program was complete. The orchestra performed an encore--although, frustratingly, no one told us what it was and no one afterwards knew either. Following the orchestral encore, Lang Lang returned to the stage for a scheduled talk with the audience. Lang Lang expressed his thanks to the orchestra, whipped out what looked like a brand new iPad, and proceeded to play what he called a "high-tech version of Flight of the Bumblebee" by drumming his fingers on the pad, occasionally reaching over to the real piano to embellish a bit, much to the audience's delight. I'm still not sure whether he was actually playing, using an app on the iPad or if he was just fooling around, pretending to play while the music played in the background (I think the latter). If that were not enough, stage hands next brought out a second piano stool and we got to hear Eschenbach and Lang Lang play two pieces for four hands--Eschenbach, of course, started his career as a pianist. Again, frustratingly, no one told us what we were listening to and no one afterward knew what the encores were, but it sounded like Debussy to me--perhaps from his Petite Suite. Probably because this was the last concert of a long tour, the mood after the show was relaxed--celebratory almost. Some of the best music I've ever heard live has been encores like this, when the pressure is off and the musicians are just enjoying themselves.

Taken as a whole, the concert was wonderful, but it got off to a slow start. Beethoven's Leonore Overture No. 3 is what I used to put on the record player, turned up loud, to listen to just before going out for final exams in college. Somehow I felt powerful, full of knowledge, in control, ready to conquer if I marched out with that music ringing in my ears. It's stirring music--or at least it should be. Eschenbach and the orchestra managed to make it sound almost lugubrious. The pace was slow, the sound was dull. I've had this experience before at Davies Symphony Hall. There seem to be pockets of rather muddled sound--although the seats were good: Upper orchestra, dead center. I noticed this also at the Itzhak Perlman concert I recently heard there. The strings in particular lacked brilliance last night. Having said that, it makes no sense to attribute the flatness entirely to the acoustics; the second half of the program was excellent. I can't explain it, but the Leonore Overture was a disappointment, and I'm afraid the Mozart suffered from the same dark, dull tone in places. The piano playing was impeccable and nicely expressive, however, especially in the middle movement (Andante). Lang Lang is one of those performers that immediately banish all worry about a possible missed or stray note, even in the most demanding of passages. He is interesting to watch--although the unnecessary flourishes suggestive of bad ballet can become tiresome after a while. His gestures while playing reminded me of Melvyn Tan (Whatever happened to Melvyn Tan?), although Lang Lang is somewhat less flamboyant.

Three things struck me visually. First, the layout of the string instruments on stage was a mirror image of what we're used to seeing in the US. The basses and cellos were on the left, the violas on the right. I've seen European orchestras perform before, and our local conductor in Santa Rosa, Bruno Ferrandis, a Frenchman, once remarked that the layout in Santa Rosa was "backwards." I'm aware of this difference in the way we array the strings, but I've never really noticed it before. It seemed to make little difference to the sound. Second, there were only two or three blond heads among the Schleswig-Holstein performers, which was a trifle surprising at first. Again--no effect on the sound. (However, as this is an orchestra for young performers drawn from areas well outside of Schleswig-Holstein, it's not hard to explain.) Third, the women in the orchestra were dressed rather more daringly than the performers I'm used to seeing in San Francisco. One of the front-row cellos had on a tight-fitting, off-the-shoulder top, another seemed to be wearing something resembling a body suit--everyone in black, of course. Once again--no effect on the sound, but these things are part of the extra dimension that a live performance provides.

I've remarked here before that I've learned to treasure the gems of live performances and not worry too much about the disappointments. This concert would have been worth it just for the second half of the program. Eschenbach gave us a very precise, controlled performance in the first three movements of Prokofieff's Classical symphony that fit the music perfectly and allowed for a strongly contrasting, almost frenzied final movement. Here the sound was clear and clean, and bright and loud where it should have been. A delight.

Lang Lang and the orchestra were in top form for the Beethoven Concerto as well. An appreciative audience immediately stood up for an ovation at the end. I wish they had been more appreciative during the performance. I've noticed over the years an inverse correlation between the celebrity  of a performer (as distinct from his or her talent) and the manners of the audience they attract. The more famous a performer is outside the world of music enthusiasts (for whatever reason) the more likely the audience is to be full of people more interested in the person than the music. These people tend to have a low tolerance for sitting still and being quiet. Davies Symphony Hall is always a co-conspirator: The seats creak, the hollow metal backs of the seats sound like timpani, the hard wood floor might as well be a giant drum--every heel resonates; coughing, sneezing, watch alarms, rustling paper, and dropped water bottles all made an appearance. Still, with the excellent performances of the Prokofieff and the Beethoven concerto, Lang Lang's funny iPad performance, and three encores, I'm not complaining. It was a lot of fun.

(Photo of Lang Lang, courtesy of the San Francisco Symphony.) Dinner beforehand at Café Della Stella was solid, as always, if not exciting. I had an excellent arugula salad with roasted (grilled?) pears, scampi as a main dish, and a tasty panna cotta for dessert. The highlight was a very tasty 2008 Villa Teresa Pinot Grigio from Italy's Veneto region. Very dry, deceptively delicate, very flavorful. Behind the fruit it had something of the quality of a really good Fino sherry. Delicious.
Posted by Colin Talcroft at 10:30 AM