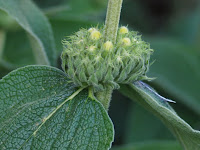 First blooms of 2010 on three plants in the garden today: Phlomis fruiticosa, the big Jerusalem sage; Cistus "Sunset;" and the purply-blue wild penstemon Penstemon heterophyllus. Phlomis is one of the first plants I put into the garden here, not realizing how big it would get. It's now about seven feet across and the flower stalks are nearly as high as me. The photo shows buds in an axial whorl. A pair of big yellow petals will pop out of each of the "cells" visible here. This plant bloomed much earlier last year (April 10). A year according to Phlomis fruiticosa was 379 days. 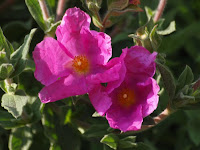 "Sunset" has been blooming around town for about a week. The one here is comparatively shaded, so it has bloomed later than many. The plant bloomed in 2009 on April 9--much earlier than this year. A year according to "Sunset" was 380 days.

Penstemon heterophyllus is one of my favorite plants. It's almost irridescent. I've seen it growing wild in rocky, higher-altitude areas in California and elsewhere. It doesn't seem to last very long (2-3 years) and doesn't seed itself much, but I'm happy to keep planting it. I have a note of it blooming in early June along Highway 97 in the north-eastern part of the state, but no record of its first flowers in the garden last year.

I write about many subjects, not just the plants blooming in my garden. Use the tabs at upper right to explore other topics.
Posted by Colin Talcroft at 6:54 PM