Surprisingly, the US Postal Service has made virtually no effort to commemorate the upcoming 75th anniversary of transpacific airmail service. A 50th anniversary stamp was issued. Call me a nerd, but I would have thought this anniversary (Monday, 22 November 2010) was worth a stamp as well.

The post office at Alameda will use a commemorative cancellation on the 22nd. It was from Alameda in San Francisco Bay (near what is now the Alameda Naval Air Museum) that Pan-Am's clippers left for Manila by way of Honolulu, Midway, Wake, and Guam to deliver commercial mail across the Pacific by air for the first time on 22 November 1935. It took about a week to get to Manila. Remarkably, a letter from the San Francisco Bay Area to Manila still takes about a week (although overnight delivery by courier--a service we take for granted--would have been impossible back then). What is significant though, is that prior to the air service a transpacific letter would have gone by boat, taking 21 days or more just to reach Honolulu. 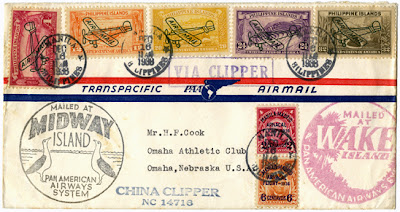 I first got interested in stamp collecting in grade school, but became more serious about it in high school, in large part because of an envelope my mother gave me that had flown the Pacific on the transpacific route, from Manila to Omaha, Nebraska, in 1937.  It had been given to her by someone in the Dayton Stamp Club--when it would have been only a few years old (photo above). Both my mother and her mother were stamp collectors. 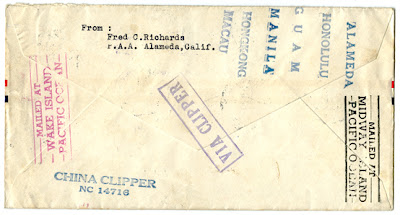 I loved the colorful cover because it was adorned with fancy cachets from Wake and Midway and had been backstamped at all the locations on the route, including Hong Kong and Macau, destinations added in 1937--which doesn't make much sense unless the envelope went from Manila to these last destinations and then made the entire return trip through Manila again, to San Francisco (Alameda) and then on to Nebraska. The cover was probably made as a courtesy for a collector by a Pan-Am employee--it's the only one I've ever seen that appears to have every possible marking from the route on it (the reverse is reproduced above). Considering the history it embodies and the pleasure it's given me over the years, it seems worth the effort to make some commemorative covers of my own for the 75th anniversary for someone else to enjoy someday. I'll be driving down to Alameda on Monday to get the cancellation for the cachet I designed (based on a vintage Pan-Am poster).

[Update: A crew from Chinese-language TV station KTSF showed up while I was getting my cancellations. They interviewed me, as I knew more about the history of the original flights than the Post Office people seemed to. As usual with these things, most of what I said was edited out and what they used seems fairly random, but, there it is.]
Posted by Colin Talcroft at 9:48 PM