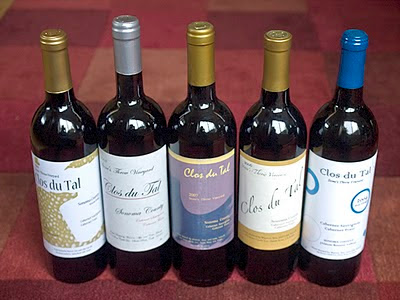 Following a day of bird watching out at Bodega Bay, I racked, sulfited, and topped up all the 2010 wines and added oak staves to the Cabernet. This year I didn't bother with the rather tedious process of testing using paper chromatography to see if the malolactic fermentation had finished in the Cabernet wines. I'm taking it on faith. All bubbling had stopped and the wines have had enough time, I believe, to complete a malolactic fermentation (I inoculated them on October 25, so they had 24 days).

Everything looks good.  I've moved the wines to a quiet, cool, dark place. Now, begins the waiting that is most of the winemaker's work. The rosé will probably be ready for bottling around Christmas time. The Cabernet will have to be racked two or three more times before bottling, at around this time next year. In sampling the wine as I racked it today, it seemed to have a particularly marked Cabernet spiciness. We'll see if that persists in the finished wine.

2010 marks our seventh vintage. The vines were planted in 2001, first bore fruit in 2003, and we first made wine in 2004 (the bottle on the far right above). There ought to be six bottles in the picture--2004, 2005, 2006, 2007, 2008, and the just-bottled 2009 (far left)--but we lost nearly all the grapes to raccoons in 2005. I made only six bottles of rather wretched stuff that year and I didn't bother to label it. In every other year, I've designed a new label. The 2008 and 2009 wines have been the best so far, with the 2007 showing the first real promise from the little vineyard. I have high hopes for the 2010, although it's likely to be less ripe than last year's wine because of the strange weather this season. I haven't tasted the 2004 in several years. It's time for a vertical tasting. What a luxury to be able to do a five-year vertical tasting of wines I've made myself.
Posted by Colin Talcroft at 6:38 PM