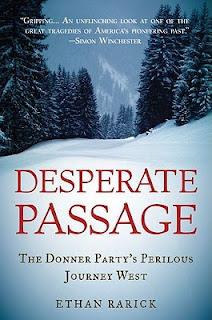 Having just returned from a few days skiing at Lake Tahoe near Donner Lake and having several times in the past seen the lake that bears the Donner name and known it was associated with the ill-fated emigrants, I decided this time to find out exactly what happened to them. At a local bookstore I picked up a copy of Ethan Rarick's Desperate Passage: The Donner Party's Perilous Journey West (Oxford University Press, 2008). Carefully researched and based mostly on the primary sources, the book is a well-written history of the 1846 tragedy. It has an extensive bibliography and an excellent index (too often missing). At the same time, Desperate Passage  has the feel of a page-turner; I read the book in two sittings. I know it's a cliché, but I couldn't put it down.

In a nutshell, the group suffered its horrible fate primarily for two reasons. First, its leaders chose to take an untried "short-cut" that turned out to be entirely unsuitable for wagon traffic over the mountains that separate California from the deserts of Nevada; it ended up costing them a month or more rather than saving time. Second, the group got a late start on what was supposed to have been a four-month journey across the continent and suffered many delays along the way (aside from the problem with the so-called shortcut). A late arrival risked snow and entrapment in the Sierras even on the established routes into California. Unsurprisingly, the Donners and the families traveling with them became snowbound before they could cross the mountain range and into California. About eighty people were trapped (many of them children). Thirty-six of them died.

Rarick follows the crossing of the continent starting at Independence, Missouri, the entrapment in snow by Donner Lake (then known as Truckee Lake) near the California-Nevada border, the ordeal of months of starvation and cannibalism, and the rescue of the survivors--which was as perilous (or more so) than most of the crossing--all in heartbreaking detail. The sections on cannibalism are gruesome, but fascinating. Rarick discusses the course it took in the case of the Donner Party but also touches on the history of cannibalism in extreme situations more generally and he even manages to get in data that give a good idea of how starvation affects the human body--and the mind--without allowing the momentum of the story to wane. Although the author maintains a somewhat detached tone that neither sensationalizes nor downplays the trials the group lived through, the portraits of the people involved--both those trapped and their rescuers--are vivid.  If I remember correctly, Thomas Hardy once said that a good story should deal with the experiences of ordinary people in extraordinary circumstances. The tale of the Donner Party certainly fits that bill.

On a personal note, I realized as I was reading that I followed almost exactly the same route across the United States as the Donner Party (although in the opposite direction) when in the summer of 2009 I felt compelled to hop in my car and drive to Ohio. I crossed into the Lake Tahoe area from the California side; drove across Nevada (much of the way along the course of the Humboldt River); crossed the Ruby Mountains in Utah and south of the Great Salt Lake*; I followed the Platte River, by Chimney Rock and Scott's Bluff in Nebraska (prominent landmarks for wagon trains); and passed through Independence, Missouri, the jumping off point for most of the wagons that headed west. It was a very long trip even in an automobile. That I traveled old roads is not that surprising, I suppose; in France, the highways are often built on top of Roman roads; the US highway system often follows the routes of the westward-moving pioneers and the overland express services that flourished before the telegraph. Still, it all seemed a bit eerie.

In a recent post about the skiing, I uploaded a photograph of Donner Lake taken from Donner Pass, the point at which most of the survivors eventually made it out of their little hell. While writing about my trip in the summer of 2009, I posted a few comments about the Scott's Bluff area, although at that time ignorant of the connection with the Donners.