On the Road: Rock Springs, Wyoming to Ogallala, Nebraska 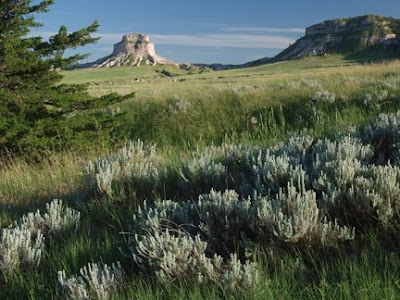 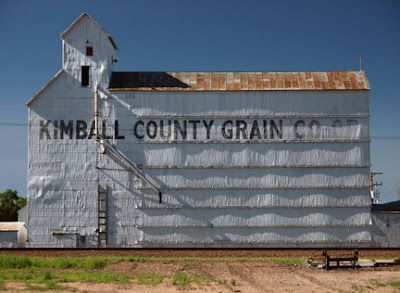 I spent most of the day today driving east on I-80, which is a fairly boring drive. Got off the highway in Laramie, lured by a sign advertising an art gallery at the University of Wyoming (Laramie Campus), but it was closed. Moved on to Cheyenne, and from there further east into Nebraska. It was more of the same, until I came to my senses and left the Interstate. I turned north on State Route 71, from Kimball to Scottsbluff, hoping to do some birding at Scottsbluff National Monument.

The scenery was immediately more interesting. Rolling farmland, vivid green, except where just mowed. Harvesters were cutting hay and making giant green rolls of it. Soon the bluffs appeared--big, eroded outcroppings of sand-colored stone. As it was late in the day, the light was very pretty. I got to the monument and took a walk of about a mile up into the bluffs. Saw a spotted towhee, hundreds of swallows, a pair of black-billed magpies--beautiful, big birds in iridescent black-green with flashes of white in flight. Also saw a mountain bluebird for the first time. I had seen the western and eastern varieties before, but not the mountain bluebird--a beautiful, all-blue bird. The other varieties have rust on the breast and sides. Then drove southeast from the bluffs to Ogallala, on highway 26.

[Update: Recently (in January 2011), I read Desperate Passage, a book about the famous Donner Party that was stranded for months in the Sierra Nevada mountains near the end of their trip across the continent. I realize in retrospect that I followed much the same route as the Donners and the families traveling with them (albeit in the opposite direction). Scottsbluff was an important landmark for wagon trains heading west.]
Posted by Colin Talcroft at 9:59 PM