On the Road: Hannibal, Missouri to Washington, Missouri 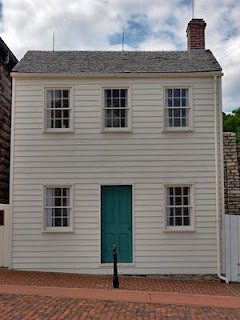 I ended up spending most of the day in Hannibal, Missouri, working. It was a nice break from driving, actually. Finally finished work at about 3:30 and then took a walk around the town. A kernel of the place as Mark Twain must have known it is left. His childhood home is there (pictured). Becky Thatcher’s house is there. Twain’s father’s office still stands. There is a large stone barn from the period as well. It is enough to get a sense of the scale of the place. What has grown around it is built on a somewhat larger scale.

Up a long flight of stairs to the north of town is an old lighthouse with a good view over the Mississippi (see photo). Halfway up are the ruins of a bridge across the river (replaced by a newer bridge). A plaque notes that Franklin Roosevelt opened the bridge (with a young Harry Truman in attendance) in the 30s. The walk up the stairs gave me some much-needed exercise. Up on the hill I saw a Baltimore oriole, a cardinal (haven’t seen one since I lived in Ohio), and an indigo bunting (ditto). 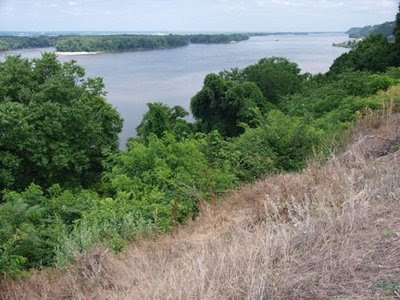 After lunch at Lula Belle’s I headed south on Highway 79, along the river and the rail lines (stopping to refresh myself with an iced latte and a scoop of coffee ice cream, which I plopped into the coffee. Along the highway, I stopped at a nature preserve that was closed. Mostly saw killdeer and the ever-present swallows and red-winged blackbirds. I’m getting the impression these are the two most common birds in America. I decided to stop for the night near Defiance, Mo, in the heart of the Missouri wine country in the area west of St. Louis, along the Missouri river, an area mostly settled by Germans, many of them interested in winemaking. Had dinner in O’Fallon. Depending on work, I plan to see a couple of vineyards tomorrow morning, see the St. Louis Art Museum after that, and then get as close to Ohio as I can before it gets dark.

[That was the plan anyway, none of the hotels I originally headed for was open, so had to divert. Ended up in Washington, Missouri, considerably further south than I had intended, but still in the wine country.]
Posted by Colin Talcroft at 9:05 PM