On the Road: Ogallala, Nebraska to Manhattan, Kansas 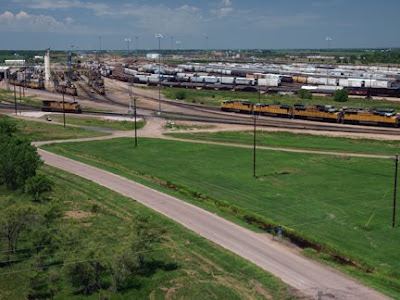 Left Ogallala, headed east later than I had intended and made slow progress at first. Stopped at Sutherland Reservoir, but saw nothing of interest, except cliff swallows nesting under a bridge over the Platte River. Much of my route today followed the river, which runs in numerous shallow channels. The road crosses and recrosses many forks.

In North Platte, stopped at the Golden Spike Tower, which is an observation tower Union Pacific has constructed for tourists. It allows a bird's-eye view of the Bailey Classification Yard, the largest rail switching and classification yard in the world, so they say. Frankly, it wasn't much to look at, but interesting enough that I don't regret the detour (see photo).

Much of the rail traffic here seems to be coal trains bringing coal down from the area around Casper, Wyoming. They get routed here, mostly to power plants in the east, in places like Cincinnati, and Boston, and New York, and Washington. For the past two days I've been seeing the trains everywhere, some of them with as many as 200 cars.

Last night, coming into Ogallala from Scottsbluff, the road ran parallel to the North Platte River and more or less to the rail lines. I happened to start on the road just as the sun was going down. In the rear-view mirror, it was no longer visible, but light was coursing over the horizon, as various objects in the landscape were still catching the last glow. One of the coal trains appeared ahead of me at a point where the track was at a slight angle to the road. The coal cars are typically polished aluminum (or so they appear to be) with vertical, beveled ribs. Each car was neatly mounded with coal. The cars look like hundreds of perfect, but perfectly burned pound cakes in baking tins. The ribs on the cars began to catch the pink light and the whole train was lit up as if with hundreds of neon tubes standing on end--actually the bevels of the ribs reflecting the last pink rays of the sun at me. It was rather extraordinary. It lasted only about seven minutes. The first minute or two I wasn't able to understand what I was seeing. It reminded me of the gaudy neon lights at the casinos in Reno.
Posted by Colin Talcroft at 10:12 PM