Last night I attended one of three concerts the San Francisco Symphony is giving this weekend with Herbert Blomstedt as guest conductor and soloist Arabella Steinbacher. Only two pieces are on the program, the Mozart Violin Concerto No. 4 and Dvorak's New World Symphony, but the orchestra offered the Dvorak Slavonic Dance No. 1 as an encore, and Steinbacher played Fritz Kreisler's Recitativo and Scherzo as an encore piece.

The concert opened with the Mozart concerto, which was given a crisp, correct interpretation, but somehow didn't sparkle--which is not to say it wasn't enjoyable. Steinbacher is clearly a gifted violinist, although she had escaped my notice until last night. I very much liked the sound of Miss Steinbacher's violin. According to the program notes, she plays the "Booth" Stradivarius, of 1716, on loan from the Nippon Music Foundation. It has a very warm, dark sort of sound, especially rich in the lower register that I very much liked, although the Mozart didn't really showcase that. It was most interesting to listen to during the encore, and I would say the Kreisler piece was the highlight of the evening. The playing was precise but expressive--beautiful really. 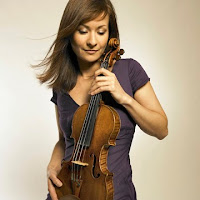 At intermission I bought her recording of the two Bartok violin concertos with Marek Janowski conducting the Orchestre de la Suisse Romande (Pentatone Classics, PTC 5186 350). After listening to it in the car this morning as I drove around town doing some errands, I have to say I'm very impressed. It's a splendid recording. I'd put it right up there with my two favorite recordings of the Bartok No. 2--Kyung-wha Chung with Georg Solti and the London Philharmonic, a 1976 recording (London CS 7032 on LP in the US) and André Gertler with the Czech Philharmonic Orchestra, conducted by Karel Ancerl, a 1965 recording that appears to have been released originally on the Supraphon label, although I have it on a much later re-release, (still on LP), on the Quintessence label (PMC 7181). It's probably about time to try to find that one on CD, as I think it remains my very favorite. I went digging around my record and CD collection to find the Gertler disc, and I see that I own no fewer than eight recordings of the Bartok Violin Concerto No. 2 (I guess I like it). I'll probably feel compelled to listen to them all again to see if I still like these three best (Steinbacher, Chung, and Gertler). Other recordings I have include performances by Yehudi Menuhin, Midori, Anne Sophie-Mutter, and Itzhak Perlman.

But, to get back to the concert, I don't think Maestro Blomstedt got the best out of his performers. The first two movements of the New World Symphony seemed rushed, the final two movements were marred by some wobbly horn entrances (although, to be fair, that has never before happened at San Francisco in the three years I've been a subscriber), and in a number of places the conductor let the horn section overpower everything else. Still, the Dvorak was fun to watch--it was the first time I'd seen this very familiar music played live.

The encore came off rather better. The orchestra sounded relaxed and strong playing Dvorak's Slavonic Dance No. 1. The audience loved it. The concert ended with a standing ovation. So, it was an evening during which the highlights came with the encores, as sometimes happens.

Photographs of Herbert Blomstedt and Arabella Steinbacher courtesy of the San Francisco Symphony
Posted by Colin Talcroft at 9:38 PM