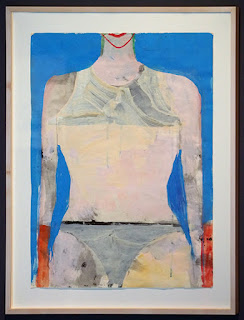 We're privileged right now to have two shows of rarely seen work by Richard Diebenkorn on view simultaneously in the Bay Area, a show of prints at the De Young in San Francisco and a show of small-scale drawings, collages, and watercolors at the Sonoma Valley Museum of Art, in the town of Sonoma, a venue that has only recently come to my attention--and that accidentally: I happened to come across a reference to the Sonoma show in one of three books published by Kelly's Cove Press in conjunction with the exhibition, which is subtitled "The Intimate Diebenkorn."

In keeping with that subtitle, the Sonoma show presents a selection of smaller works, the largest being no more than about 24 x 36 inches (most considerably smaller) in various media. None of the images was included in the large show of Diebenkorn's work in the summer and autumn of 2013 at the De Young Museum (Richard Diebenkorn: The Berkeley Years). Some Bay Area viewers may have seen the bulk of the Sonoma show at the College of Marin (September-November 2013) or San José State University (March-May 2014), but the selection of works now at the Sonoma Valley Museum of Art has been augmented by about 12 pieces not included on earlier stops. The show next travels to the University of Montana (September-December 2015).

The De Young show of Diebenkorn prints highlights the museum's "latest significant acquisition of [Diebenkorn's] prints, made possible by the Phyllis C. Wattis Fund for Major Accessions and the generosity of Phyllis Diebenkorn," the artist's late widow--to use the words of the introductory gallery panel. I believe the De Young Museum now has the largest collection of Diebenkorn's prints in the world aside from the collection of the Diebenkorn Foundation, from which the traveling show now in Sonoma has been assembled.

The Sonoma show provides an intimate overview of the various styles in which Diebenkorn worked. There is a good selection of representational work including still life subjects, nudes, and landscapes as well as abstract work, both in the fluid, organic style of the Berkeley and earlier periods and the more rarified, highly linear style best known from the large paintings of the later, Ocean Park period. 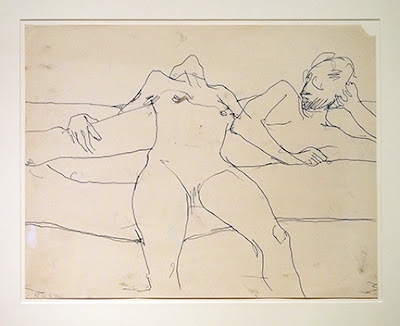 The works are arranged thematically rather than chronologically, which allows a comparison of similar types of work from different periods, although it somewhat obscures Diebenkorn's journey from abstraction into figurative work and still life and then back to abstraction--part of what makes looking at the whole of his artistic career fascinating. Despite the diversity of subject matter, Diebenkorn was always concerned with formal compositional problems. An interior view of a posed model or a landscape was for Diebenkorn always as much about dividing up space on a flat plane as any abstraction was. The works as shown demonstrate both the breadth of his subjects and the compositional concerns that unite his work. The 1962 figure drawing in ballpoint pen shown here (above) is an excellent example--a highly economically rendered pair of nude figures but, at the same time, a composition consisting in large part of blank rectangular or squarish areas of paper separated by thin lines. The legs of the male figure at the left side of the page are particularly ambiguous. The 1958 untitled oil landscape on paper shown below likewise blurs the line between the abstract and the descriptive. 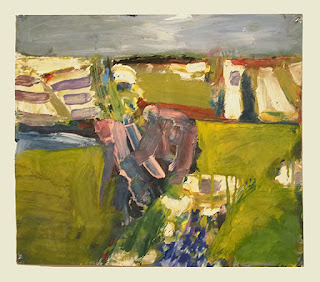 The Sonoma venue is divided into four areas: the main exhibition space, a permanent art library off to one side, a space at the front of the building where visitors are offered a place to play with paper and drawing tools if inspiration has hit them, and a darkened area behind a wall at the rear, where two videos about Diebenkorn run in a loop. One of these was made at the time of a major retrospective of the artist's work at the Los Angeles County Museum of Art, in 1977. The other shows Diebenkorn at work at Crown Point Press, in Oakland, collaborating with master printers Marcia Bartholme and Hidekatsu Takada, in 1986, photographed by Kathan Brown, the founding director of Crown Point Press. The former is short (22 minutes) and interesting mainly because it shows Diebenkorn politely, somewhat shyly interacting with an adoring public at the opening reception for the Los Angeles exhibit. The latter video (35 minutes) is of greater interest and well worth the time it takes to watch. It offers a rare look at the artist in the studio, showing him proofing prints, working on copper plates, consulting with the printers about changes, and finally coming to decisions about finished versions of a number of pieces (one of which he ultimately decides to abandon after much frustration). 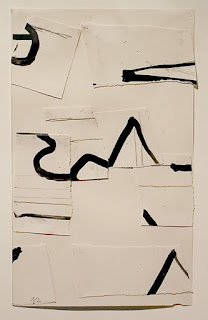 Diebenkorn's work process was interactive, restless, and experimental--involving interaction between the artist and his materials. Each new piece was a kind of conversation with the medium: an idea proposed, considered, approved of or rejected--the artist always listening and responding to the voice of the evolving work--the cycle beginning again, repeating until an equilibrium was achieved. It's a process especially well suited to collage, so it's not surprising that collage enters into many of the smaller works on display in Sonoma. Some of the drawings are on joined pieces of paper. One small abstract work from 1992, the year before his death (shown here), consists of pieces of what appears to be a drawing cut up and arranged on a second blank sheet (coincidentally, highly reminiscent of some of the work of Basque artist Eduardo Chillida (1924-2002)). The Crown Point Press video shows Diebenkorn cutting up proofs and pasting them together to rework a composition--essentially designing a print by collage. 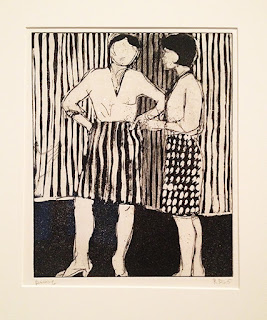 The De Young Exhibit focuses on Diebenkorn as a printmaker. He seems to have been interested in printmaking of various types throughout his long career, and many of the last works he made--when ill health had made it impossible to tackle the large canvases he favored as a younger man--were prints. Most were etchings and drypoints, but the De Young show includes a fair number of lithographs and you get a sense looking at the early examples that he was testing the limits of what appears to have been a new medium for him at the time. Some of these early lithographs are essentially line  drawings in crayon, others look like puddled ink drawings. Later color lithographs from the 1980s are more mature, looking very much like Diebenkorn the painter. Again, the subject matter in the De Young exhibit is diverse, including figure studies, landscapes, still life subjects, and abstraction. Nearly all the pieces exude something essentially Diebenkorn despite that diversity.