Art I'm Looking At: Turner at the De Young 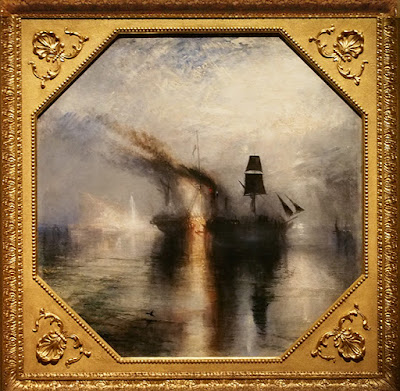 San Francisco's De Young Museum is now presenting a major show of the late work of J.M.W. Turner (1775-1851). Organized by Tate Britain in association with the J. Paul Getty Museum in Los Angeles and the Fine Arts Museums of San Francisco, this is the largest exhibition of Turner's work ever mounted on the US West Coast. The De Young show runs through September 20, 2015. The exhibition is a large one, including more than sixty oil paintings and watercolors, but the museum has devoted a great deal of space to their display. The galleries therefore feel spacious, with the works widely spaced on the walls, making it easy to see them without feeling hemmed in by other viewers. 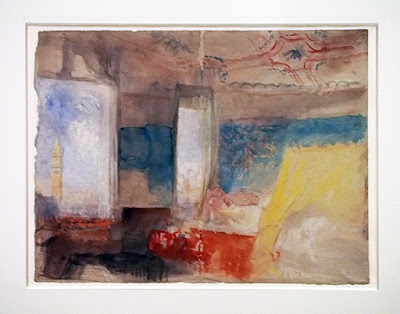 While this show is likely to attract attention for some of the famous large oil paintings on loan from institutions around the world (such as Peace—Burial at Sea (1842), pictured at the top of this page), it's an excellent opportunity to see a large number of Turner's very fine watercolors together. I've always had mixed feelings about Turner. Some of his work seems sublime. Some moves me not at all--for reasons I can't quite articulate. I don't much care for the allegories, for example, especially those that include figures. I think Turner was at his best when using his eyes to depict what he saw rather than attempting to tell stories. I most enjoy the work that veers off strongly in the direction of abstraction, which is perhaps why I find the often more loosely drawn and quickly executed watercolors especially interesting. The interior scene reproduced immediately above (of one of Turner's hotel rooms in Venice, circa 1840) is a good example. Only the ceiling decoration and the distant view of the Campanile anchor this little painting in reality. Without these, it's mostly a composition dominated by vaguely defined blocks of color. 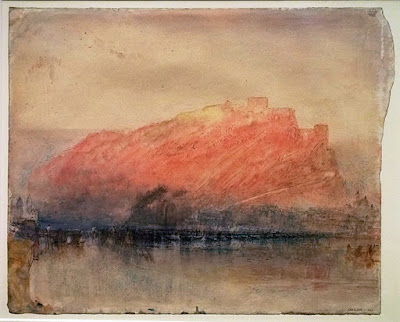 An 1841 watercolor depicting the Ehrenbreitstein fortress on the East bank of the Rhine, overlooking Koblenz, is similar. Only the fortress on top of the rock is drawn with much precision. The rest of the composition is highly impressionistic, rendered in textured washes. It's easy to see why Turner is often considered to have pointed the way toward Impressionism. There is much in the show that brings Monet to mind. This piece even made me think of Rothko, with its horizontal bands of soft color. Looking at the pieces in the show (the largest group of Turners I've seen at one time), I noticed diffuse bands of color serve as the compositional armature of many of his works--although mostly vertical bands—typically deep colors on the sides of a composition and a swath of bright, pale color in the middle, suggestive of color field painting, a development that lay about 100 years in the future.

I was also struck by a pair of watercolors entitled The Red Rigi and The Blue Rigi from 1841-1842, depicting a mountain close to Lake Lucerne, in Switzerland (the latter shown here). The idea of painting the same subject in a series in different lights and from different angles immediately brings Japanese printmaking to mind. Although it wasn't too long after this time that Hokusai's most famous series of images of Mt. Fuji (originally published in 1831) was becoming known in Europe, 1841-42 was probably too early for Turner to have been influenced. Monet certainly was aware of Hokusai.

Inclusion of unfinished works at the end of the exhibition is a nice touch. Turner was criticized in his own day for, among other things, his dissolution of form—for his distinctive indistinctness that many took to be incompleteness. Being able to see truly unfinished pieces makes it abundantly clear how calculated Turner's apparent incompleteness was.
Posted by Colin Talcroft at 11:42 AM