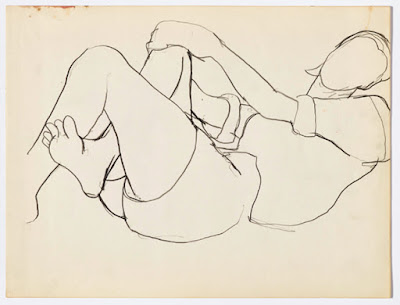 It's been a year of Diebenkorn in the Bay Area. Following a show of prints at the De Young in San Francisco and a show of works on paper at the Sonoma Valley Museum of Art, in Sonoma, earlier in 2015, The Cantor Arts Center at Stanford is hosting Richard Diebenkorn: The Sketchbooks Revealed, a show of 29 of Diebenkorn's sketchbooks, mostly a gift of Diebenkorn's widow, Phyllis. The sketchbooks are displayed publicly here for the first time. In conjunction with the show is a small exhibit celebrating the center's recent acquisition of an Edward Hopper painting from 1913 entitled New York Corner. The connection may not at first be obvious, but early in his career Diebenkorn was deeply influenced by Hopper. 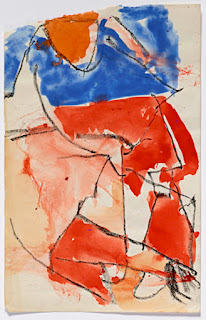 I visited the Stanford campus recently to see both offerings. I had never been to the Cantor Arts Center, which has an extensive permanent collection that looks well worth exploring.

The sketchbooks contain more than 1,000 drawings that span Diebenkorn's career. He appears to have kept several sketchbooks going at once and to have used them randomly, so that looking at them from page to page doesn't provide a sense of development. Almost none of the pages is dated and the chronological order of the books itself appears to be unclear. Instead, we get a series of snapshots--some finished works, others the simplest outline of an idea. All but one of the sketchbooks are opened and housed in plexiglass cases, so only two facing pages are visible from each. One has been separated into individual leaves and hung in a rack that allows you to see the whole as if turning its pages.

All 29 sketchbooks have been digitized, however. Two large monitors in the gallery allow you to look at every drawing, as well as the various items Diebenkorn left tucked into their pages, and even the front and back covers of each book. The digital presentation is available online. Thus, the 29 sketchbooks can be browsed from home, although the pages are slow to load, even with a fast Internet connection.

The sketchbooks may not document a linear development of the artist's work, but they offer glimpses into his thinking. Most of the drawings are figure sketches--some from models, some sketches of friends and family—, but there are doodles that record ideas for later use, there are preparatory sketches for some of the large Ocean Park paintings, and there are abstract sketches that appear to be finished pieces. Of special interest are clusters of related sketches of models that allow us to see Diebenkorn making repeated attempts to capture a pose (as seen above). 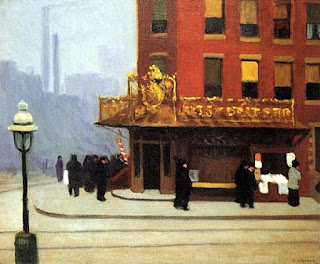 The Hopper is worth seeing all on its own, but the galleries juxtapose New York Corner with early paintings by Diebenkorn that show a genius still unformed. They are, on the whole, not compelling works, but demonstrate that even the most highly regarded of artists has to start somewhere. I doubt contemporaries looking at these pieces would have predicted Diebenkorn's subsequent development.

The Hopper shows the influence of Impressionism, especially in the rendering of the distant cityscape at the left of the canvas and in the use of black (and here, indirectly, the influence of Japan). I particularly enjoy the way the little rectangle of white at the left of the clustered figures interacts dynamically with the white blocks at the far right. Despite the Impressionist influence, Hopper's signature style is already apparent. He was a master at using architecture and human figures to suggest the quiet, almost inaudible hum of distracted humanity.

Both the Diebenkorn and the Hopper exhibits were to have closed February 8, but have been extended to August 22, 2016. The Cantor Arts Center is at Stanford University (328 Lomita Drive at Museum Way, Stanford, California). Free admission.
Posted by Colin Talcroft at 12:38 PM