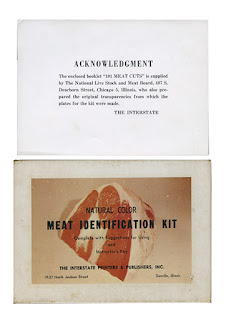 I recently stopped at a roadside estate sale in Bodega Bay, California, where a friend and I spent a silly 45 minutes or so going through some of the possessions of a departed soul deeply interested in food and food preparation. There were stacks of cookbooks of every description and a large pile of old kitchen tools, many of uncertain application. We had fun with other browsers trying to figure out what some of the more obscure utensils were. The back-and-forth, face-to-face interaction with strangers was a refreshing change from online exchanges.

I bought an egg separator for only a dollar, simply because I liked its coiled design. It looks like something Alexander Calder might have twisted out of wire. My special find, however, was the "Natural Color Meat Identification Kit" that I found sitting on top of a stack of cookbooks. At first I laughed. The idea seemed absurd--a field guide to meat. Initially I was drawn to it because it seemed such an unlikely thing for anyone to have created. 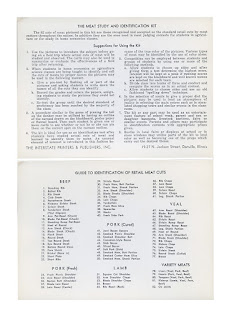 On closer examination, however, it began to appeal because of its ingenuousness. No irony here. The Meat Identification Kit is in earnest. The box boasts that it's "Complete with Suggestions for Using and Instructor's Key." It's not dated, but my online research suggests it probably appeared in the 1960s, published by The Interstate Printers & Publishers, Inc. at 19-27 North Jackson Street, Danville, Illinois. Designed for students of agriculture and home economics classes, the cards are intended to teach recognition of common meat cuts--cuts "recognized and accepted as the standard retail cuts by meat cutters throughout the nation." It includes 82 cards (23 for beef, 17 for fresh pork, 10 for cured pork, 11 for lamb, 16 for veal, and six for "variety meats," which are organs and joints. There is a key card with all these listed and numbered (each of the meat cards has a photo on the front, a corresponding number on the back). A separate card gives the aforementioned suggestions for use, which include "A procedure similar to the game of pinning the tail on the donkey" with students pinning the meat cuts where appropriate on an outline of an animal carcass, or using the pictures "to introduce the subject before going on a field trip where actual cuts of meat will be studied and observed." (I'm tempted to add "in the wild" at the end of that sentence.) There is also an acknowledgement card that refers to a booklet entitled "101 Meat Cuts" supplied by the National Live Stock and Meat Board" but the box seems full without such a booklet and there is none present. The set I found has 82 numbered flash cards. Later editions appear to have had a handful over a hundred. 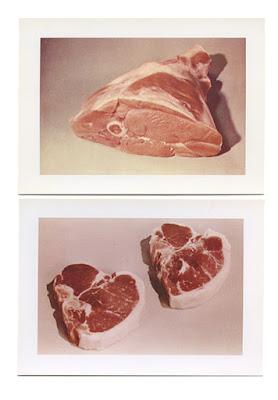 Doing my online research, I've come across at least one person with a set who has posted views of all the cards--although I notice that that site reproduces a later revised version of the kit, with more than 100 cards. The one I found appears to be the original issue. I found a couple of expired Etsy listings from 2009 offering single cards from the set for sale. I found a mention of the kit as a reference source on a curriculum sheet for a meat grading class from Chico State University of uncertain date. The University Libraries at Virginia Tech publish a History of Food and Drink Collection Blog that mentions the Identification Kit in a number of posts and calls it a staff favorite. (This also appears to refer to a later edition with more than 100 cards.) David Letterman got a hold of one of these kits and used it in at least two shows to do a segment entitled "Know Your Cuts of Meat." The first apparently aired on CBS on March 24, 1999, the second on April 9, 1999. I haven't seen these episodes, but it's easy to imagine Letterman making fun of the kit. I'd be interested to hear from anyone who might know more about The Natural Color Meat Identification Kit.

Now, the question is, what am I going to do with this curiosity? I mean after I've finished learning my meats.
Posted by Colin Talcroft at 5:08 PM