By now, most anyone with more than a passing interest in art history understands there was a period of intense interest in Japan and things Japanese in the second half of the 19th century that had a profound impact on Western art and design. Because of that, I suspect "Looking East: How Japan Inspired Monet, Van Gogh, and Other Western Artists" at San Francisco's Asian Art Museum will seem like a rehashing of the obvious to more than a few visitors. But don't let that keep you from going. There is much of interest on display, all from the collection of The Museum of Fine Arts, in Boston—well known for the quality of its Asian collections in particular.

The Boston museum must be bursting at the seams. I ran into a couple at the show from Boston who said its best pieces seem to be perpetually on loan somewhere (they came here to see work they rarely get to see at home), and, although I've never visited the Boston museum, I have seen many of its masterpieces on tour in Tokyo, including Van Gogh's 1888 portrait of the postman Joseph Roulin, which is now in the San Francisco show. 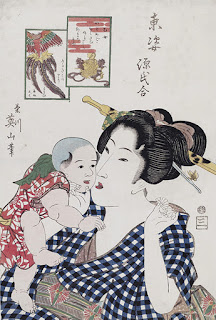 All the familiar points are made. Wall texts and a short video presentation touch upon the freshness of much of Japanese art and design to Western eyes when things Japanese began to arrive in quantity in Europe and the United States in the late 1850s. In particular, Western artists and designers were inspired by Japanese attention to scenes of everyday life; by bold compositions that often relied on large expanses of black, a lack of perspective and shading as illusionary techniques resulting in a flattening of the picture plane, use of strong patterning, sharp diagonals, and a fondness for boldly truncated scenes (and asymmetrical balance in general); by attention to detail in the applied arts; and by highly advanced full-color woodblock printing techniques—perhaps the most sophisticated in the world at the time. These and other ideas are illustrated by more than 170 Western and Japanese pieces, including examples of the decorative arts, paintings, prints, drawings, and textiles. Shown here is Kikukawa Eizan's Otome (c. 1818–23) and a painting by Cassatt (Caresse Maternelle, c. 1902), inspired by Japanese depictions of mothers with their children. 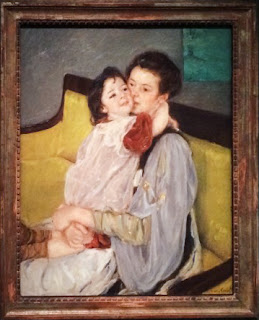 Even if the ideas aren't new, the show is worth seeing for the individual works of art on display, and a worthwhile attempt has been made to show pieces side-by-side that illustrate the ideas discussed. In addition to the Van Gogh portrait, highlights include works by Monet, Cassatt, Toulouse Lautrec, Edvard Munch, and others, among Western artists; prints by Hiroshige, Hokusai, Eizan, Kunisada, and others, among Japanese print designers—including some of the finest individual impressions I've ever seen; some excellent decorative art; and, at the end of the show, a small group of photographs showing Japanese influence, including work by Karl Struss and Alvin Langdon Coburn. The latter's Tower Bridge (1909) is shown below. 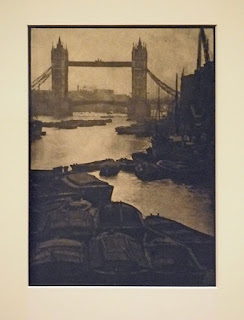 "Looking East: How Japan Inspired Monet, Van Gogh, and Other Western Artists" closes February 7, 2016. At the Asian Art Museum, 200 Larkin St, San Francisco, CA 94102, (415)-581-3500. Open Tues—Sun  10AM—5PM. Closed Mondays. Prices for the show vary. Members get free admission. Children (12 and under) and SFUSD students are free. Adults $20 on weekdays, $25 on weekends. Seniors (65 and over), youths (13-17), and college students with ID are $15 on weekdays, $20 on weekends. These prices seem a bit steep, although they include general admission. That said, you'd need an entire day to see both the Japan show and the permanent collections, so, essentially, you're paying the entire amount to see the special exhibition–unless you move through galleries far more quickly than I do.
Posted by Colin Talcroft at 1:14 PM