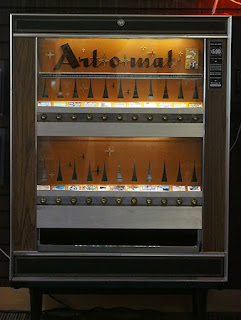 On a trip into San Francisco to see the Bonnard show now on at The Legion of Honor , I took a quick detour down to San Carlos to see the Art-o-Mat® in the San Carlos Public Library. This one is very similar to the one at the Exploratorium, which I visited last week, but it's a different color (brownish-orange rather than red). It has an added box on the side that accepts $5 bills, again like the Exploratorium example.

This time I chose a small flipbook made from barcodes. The subject of the piece I got turned out to be Bruce Lee, the work of Scott Blake, who seems to like to make images out of barcodes. The little flip book zooms in on Barcode Bruce Lee, "a digital mosaic made entirely of barcodes from movie DVDs the Chinese martial artist appeared in."

This is the fourth Art-o-Mat® I've seen so far. There are eleven in California, 142 or so nationwide. I hope to visit the one on the Stanford University campus next. An Art-o-Mat® is a vintage cigarette machine converted to dispensing art rather than cigarettes. For more about the Art-o-Mat®, see this post.
Posted by Colin Talcroft at 7:58 PM