I recently spent a day at Stanford University. I went to see the Art-o-Mat® that's supposed to be on campus, but, despite two hours of looking—questioning telephone operators, librarians, and people in the art building and at the Cantor Arts Center—I had to give up. I imagine it's there somewhere, but apparently its exact location is a guarded secret. The Art-o-Mat website mentions "Residential Services." Their officers were closed. A subsequent phone enquiry so far has been ignored. 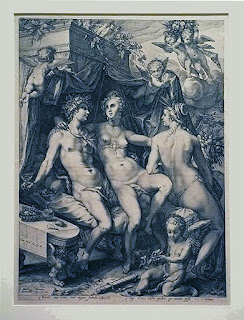 After giving up, I went into the Cantor Arts Center thinking I'd look at the permanent collection quickly,  but immediately I got sidetracked by a show of mannerists prints. Prints and paintings of this period usually aren't my sort of thing—but I was quickly drawn into the show (Myth, Allegory, and Faith) and ended up seeing it all, in detail.

Detail is the right word. Myth, Allegory, and Faith includes etchings, woodcuts, chiaroscuro woodcuts, and engravings, but most of the prints on show were the latter—and engravings often of astonishing precision. Magnifying glasses, tethered to the walls, were provided to facilitate seeing the finest of lines, a nice touch. It's hard to imagine the time and effort required to produce this kind of work. I enjoyed nearly every piece there was to see, but favorites included: David Beheading Goliath (1540), an engraving by Giovanni Battista Scultori (1503-1575), shown below; Without Ceres and Bacchus, Venus Grows Cold (1600), by Jan Saenredam (Dutch, 1565-1607), shown left; Saturn (c. 1540, printed 1604), a four-block chiaroscuro woodcut by Giuseppe Niccolo Vicentino (Italian, active 1540s), after Pordenone; Neptune and Thetis (after 1551 to 1580), an engraving by René Boyvin (French, 1530-1598) after Léonard Thiry; The Three Fates (1538-1540), an engraving by Pierre Milan (French, active 1540 to around 1557); The Rest on the Return from Egypt (1575), an engraving by Cornelis Cort (Dutch, 1533 to before 1578), after Federico Barocci; and Venus and Cupid (1505-1536), an etching by Daniel Hopfer (German, 1470-1536), among many others. The luminous quality achieved in the engravings in particular was startling. Nearly every print included the human form—notoriously difficult to capture accurately in any medium, particularly when foreshortened. These artists have succeeded, using overlapping engraved lines that in some instances wrap themselves around contours with such natural grace and rightness that they beggar belief. Well worth the time. Through June 20, 2016. 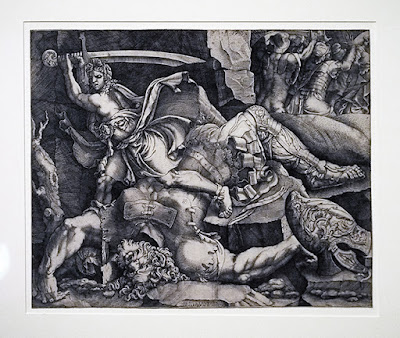 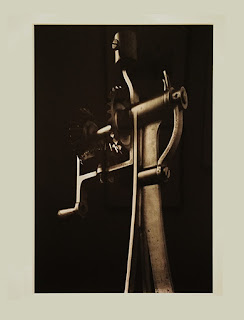 I also saw an interesting group of drawings of the Battle of The Little Bighorn by one of its participants, one Chief Red Horse of the Minneconjou Lakota Sioux, who fought against Custer there, and a small (one-room) exhibition called Speed and Power, a rather disparate grouping of photographs from the Cantor Art Center's permanent collection. While the theme seemed a little forced, there were a few gems among them. I particularly enjoyed Mechanical Form 003 (2004) by Hiroshi Sugimoto (1948- ), shown here, and Satiric Dancer (1926), by André Kertész (1894-1985). 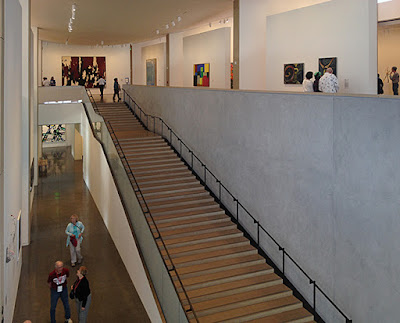 I had intended to look at the new Hopper and the Diebenkorn sketchbooks again at the Cantor Arts Center, but, with time running short and having seen them back in December, I headed next door to The Anderson Collection, in a low, modern building that looks closed even when it's not. I wanted to get a taste of the place to see if it was worth coming back to for a more leisurely look. Worth it? Yes.

The building (itself very interesting) houses only a portion of the personal collection of the Andersons (whoever they are—I didn't have time to find out*), who must be in the upper 1% of the 1%. Frankenthaler, Motherwell, Diebenkorn, Pollock, Guston, De Kooning, Nevelson, Rothko, Morris Louis, Wayne Thiebaud—many more. Just what's on display here would make a very fine museum of post-war modern art for a fairly large city, yet this is only one part of a much larger collection in the possession of a single family. I particularly enjoyed a black Louise Nevelson sculpture positioned directly across a passageway from a large set of black metal elevator doors—creating a pair of bookends—with an uncharacteristically dull De Kooning visible between them (the De Kooning one of the very few duds in the place.) Definitely worth another visit. Below is Wall Painting No. IV (1954), by Robert Motherwell (1915-1991). 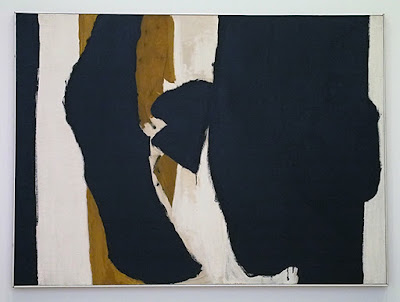 *Following my visit, I looked at the website for The Anderson Collection.

Posted by Colin Talcroft at 8:45 PM