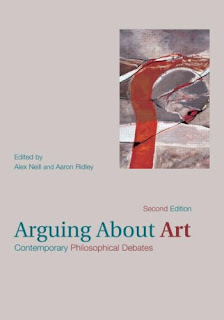 Arguing About Art, subtitled Contemporary Philosophical Debates (edited by Alex Neill and Aaron Ridley, Routledge, Second Edition, 2002), appears to be intended as a textbook, although I didn't know that when I acquired it. How and when this book found a place on my bookshelf now escapes me, but I liked the title. It's a series of paired essays of opposing viewpoints, each preceded by a summary that neatly captures the issues raised. Re-reading these introductory texts after reading the related essays helps retain the main points of each argument.

The subjects range widely. The first pair of essays attempts to decide whether food is art. The last section examines questions related to public art, specifically the installation and later removal of Richard Serra's sculpture Tilted Arc, in Washington D.C. (this section differs from the others in that it comprises four sub-sections rather than two—a transcript of hearings about the sculpture, the two main essays, and an essay that looks at the Serra sculpture alongside Maya Lin's Vietnam Veterans' Memorial). In between, writers discuss authentic musical performance; fakes and forgeries; rock music and musical culture (this pair seems dated now); appreciation, understanding, and nature; photography and representation; feelings and fictions (about why we empathize with characters we know to be fictional); the seeming paradox of enjoying horror; sentimentality; art and morality; and feminism and aesthetics. I thought the essays on fakes and forgeries, on photography, on enjoying horror, on sentimentality, and on public art most interesting, but generally worth a read as an introduction to some basic questions in aesthetics.
Posted by Colin Talcroft at 9:00 PM