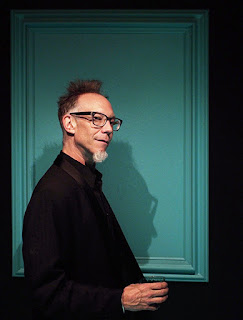 Bill Shelley and Chris Beards have launched a new art space in the Backstreet Building, in Art Alley, in Santa Rosa's SOFA Arts District. I attended the grand opening of the new space on Friday night (November 3), not knowing what to expect from the outset and then feeling a bit baffled by the curtain closing off the space when I arrived for a look. There was no door, just the curtain. The entry was reminiscent of a curtained-off side gallery in a museum reserved for a video installation, projected film, or a piece of neon or other lighted art--and that was what I had expected to find.

When I poked my head in, I was disappointed. First, neither Bill nor Chris was in the space, and I had come in part to say hello and lend support, but I was disappointed more because the space was simply an empty room with black-painted walls onto which a series of empty white frames of varying sizes had been hung--or, I should say, a series of framed white blanks, the frames painted white as well. My heart sank. I like these people. I wanted to like what they had done, but it seemed there was nothing much to see. The show seemed a hackneyed conceptual art piece that was immediately graspable and therefore of little interest. I left almost immediately to look at some of the other studios. I found Chris (pictured above) in a hallway. I said something polite and later was able to greet Bill on a second foray into the space. I had a little wine (and they were serving some decent wine). I talked with a few of the people visiting, mostly acquaintances. I looked at the empty frames on the walls.

Before long, the framed blanks seemed not entirely white any more. They had a slight blue-green cast, as if someone had got the color balance wrong in Photoshop. I thought that a little strange.

A few minutes later, I suddenly saw that the frames and the spaces they enclosed were not white at all, nor were they a pale, slightly blue-green sort of white, but a vivid, saturated aqua, the color approximated in the photo of Chris above. Chris later told me the color is called "Poolside Blue." I was genuinely shocked. I began to doubt my own eyes, but it became increasingly clear that it was no illusion. The "paintings" were, indeed, a blue-green reminiscent of the bottom of a swimming pool. I realized something else. When I first saw them, I had expected the mounted pieces to be white. Because of that and because my eyes took some time to adjust to the darkness in the room, I had seen them as white. It was only as my eyes became accustomed to the darkness that I was able to see the color. It wasn't long before I was doubting not the color, but that I had at first been capable of not seeing the color. And so it turns out that there was much more to see and think about in that black room than I first thought. I feel a little embarrassed that I was initially so quick to give up, but, in my own defense, I went back. I kept looking.

On one level, there really isn't much to see in the room--it's just a series of uniformly colored, framed spaces on a black wall, but during the past two days I've found myself thinking about what I saw almost constantly. The installation raises many questions about how we see, how expectations can color (literally) our perception, and how two people can see identical images very differently (there were quite a few people discussing what color they were seeing and not all agreeing). I keep asking myself: what color were the "images" on the wall? The answer depends on who you ask and when you ask.

Adding a layer of complexity, the chosen color is somewhere between blue and green. The blue/green distinction is notoriously slippery in many languages. In Japanese, for example, my second language, the word ao often stands for both the English words "blue" and "green." In Japanese the sky is ao but so is a "green" traffic light. Foliage, too, is ao. Chris and Bill chose the color deliberately for that ambiguity. 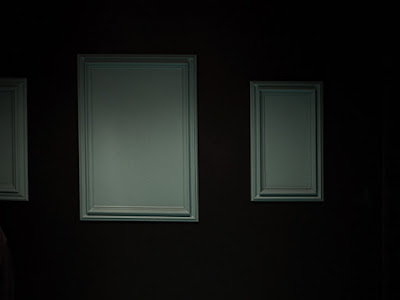 I look forward to seeing what Bill and Chris get up to in the future. The current show, "Somewhere Else" will be viewable again next weekend, November 11 and November 12, between 11AM and 3PM. Congratulations to both Bill and Chris on the new space and for presenting us with an entertaining intellectual exercise.

[Update: I later read some comments Chris wrote about the installation that mentioned the recorded highway sounds playing in the background. I didn't hear any sound. I have no recollection of a "soundtrack" to the show. I imagine I was so focused on what my eyes were telling me that I completely ignored what my ears were telling me.]
Posted by Colin Talcroft at 7:49 PM