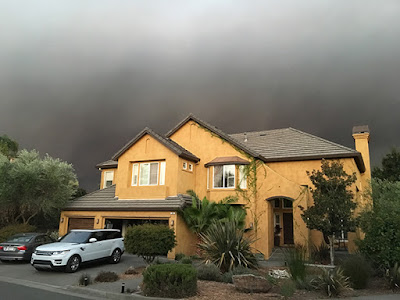 It's been a month already since wildfires swept into Santa Rosa from the north and then began to threaten from three sides. The first night was particularly scary. The wind was extraordinary. Warm and relentless. I went to bed thinking only that the wind was strange and unsettling. A few hours later, my son wakened me, smelling smoke and saying something about fires. Later, when I told him he had roused me, he said that I had, in fact, awakened him. I have no recollection of that. Memory becomes patchy in times of stress, perhaps, because next I remember gathering a few things together to put in the car, just in case, and then standing in the street with neighbors, looking north toward Fountaingrove, into a wall of black and charcoal-colored smoke fringed with an orange glow. And then the distant, repeated popping of what people tell me was propane tanks and cars exploding. I don't remember exactly when we left, but the power was out soon after we awoke to the smell of smoke. It was some time the next morning. We filled the car with some important possessions--mostly art and family irreplaceables--and headed to my mother's house, in Sebastopol, about 10 miles to the west, three cats in tow. There was so little news at first and rumors swirling. It was surprisingly hard to get information about what was going on. Ultimately, local radio stations proved the best source of accurate news. The photo above shows the wall of smoke behind a neighbor's house. Immediately below, a firefighter from the Los Angeles area gives details of progress in fighting the blazes at a makeshift information post in front of the Coddingtown Mall Whole Foods store. 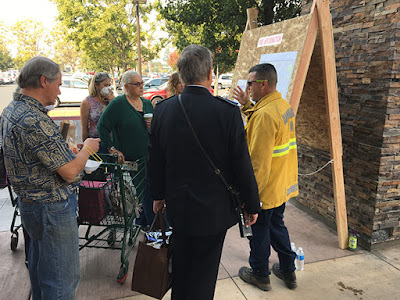 We spent a week in Sebastopol, the cats in the garage, disoriented, two of them quiet, one crying softly but incessantly. We had the luxury of being able to go back home during the day to take out more valuables. The house, although powerless and in a neighborhood largely abandoned, remained just outside the mandatory evacuation zones. We drove the second car out. Evenings were occupied by a little reading and watching the fire updates on Internet maps. The situation continued to worsen. The fires kept spreading. The air was heavy with smoke at home. The ground in Sebastopol was littered with ash. It was about five days before it became clear that the fires would be contained before they reached us. 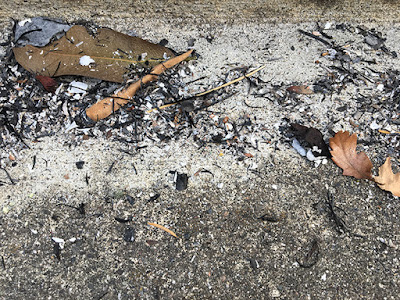 Unsettling. An inconvenience. An anxiety-filled temporary disruption. Happily, for us the fires were not more than that. For so many others, the fires took everything in minutes. Many escaped with virtually nothing, and so I feel I have nothing to complain about. It could have been much worse. I feel particularly for my artist friends and acquaintances who lost not only their homes but their studios and years of work, which I imagine must feel almost like losing a child. 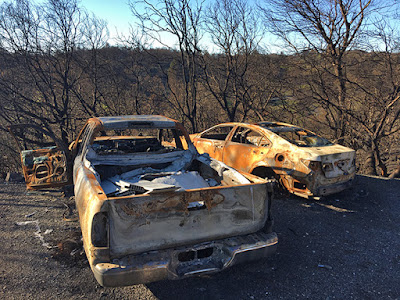 Part of me wanted the house to burn. I suppose that's a strange thing to say and perhaps easy for me to say because it's so hard to know how it would really have felt to see everything reduced to ash. But there was a part of me that kept thinking it would be liberating to lose all material possessions. It would allow a clean re-start. It would create an unequivocal demarcation line. A before and after. The Buddhists tell us that to possess nothing and to desire nothing is the true road to happiness. Perhaps they are right, but I am hopelessly attached to beautiful things. Most of what I took out of the house was art--my own and the art of others. And, as I say, it's a luxury to be able to think about these things in the abstract, without the actual shock of complete loss. We were lucky. Most of me is glad the house still stands, contents intact. Grateful to the firefighters from all over the country--and as far aways as Australia--who came to help. 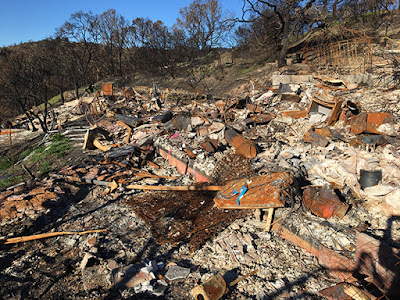