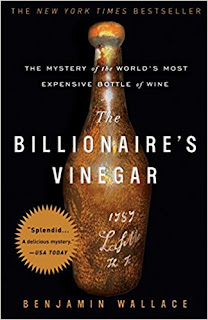 I recently finished a book about forged art (specifically, about fake Vermeers). Mentioning that book to a friend prompted her to lend me The Billionaire's Vinegar, by Benjamin Wallace (Three Rivers Press, 2008), another book about forgery--in this case, forged wine. The emergence in 1985 of bottles of wine from the 1784, 1787, and other vintages purportedly owned by Thomas Jefferson, supposedly purchased by him during stays in Paris at around that time, was big news taken up by newspapers and news magazines around the world. I remember the stories. Skepticism wasn't far behind. The Billionaire's Vinegar is a nice piece of investigative journalism that goes a long way toward unraveling the mystery behind the discovery of the wine, its sensational sale for hundreds of thousands of dollars, the doubts about its authenticity and the authenticity of other antique bottles, and the investigations that ultimately exposed the Thomas Jefferson wines as having been faked by one Hardy Rodenstock, whose real name was Meinhard Görke.

Rodenstock was a genuine connoisseur, it seems, and, at least at first, had a talent for discovering genuine old bottles, usually buying them from forgotten cellars at old estates in Britain and Europe. He was something of a showman, too, and became known for staging incredible vertical tastings of some of the world's most sought-after wine. Inevitably, the supply of genuine bottles (small to begin with) began to dwindle following a boom in the world of fine wine actions that fueled demand, prompted collectors to sell old wine, and spurred old wine sleuths to find it. Rodenstock turned to forgery. As is so often the case with good forgers that eventually get caught, he began to get a little reckless--coming up with finds that began to seem too good to be credible. However, in a familiar pattern, some who initially judged some of his questionable wines to be genuine stubbornly stuck with him even as suspicion grew, because their reputations had become entangled with his. Michael Broadbent was the main casualty. Jancis Robinson was peripherally tainted, although less so.

Among those who bought fake wine from Rodenstock were the Forbes family and billionaire Bill Koch who brought his wealth to bear once his suspicions were aroused, funding an extensive (one might say obsessive) forensic investigation into the Jefferson bottle and others he had bought. Koch ended up spending several times the $150,000 or so the Jefferson bottle cost to ultimately determine that not only was it a fake but that Rodenstock had sold a string of highly questionable bottles over the years, notably old vintages of Chateau d'Yquem and other old Bordeaux in great years and in large-formats (imperials of 1921 Chateu Pétrus, for example, although the chateau had no record of any such bottling)--precisely the sort of rarity that collectors lust after. As in the case of Han van Meegeren's forged Vermeers, Rodenstock's forged wines cannily exploited the desires and assumptions of their victims, along with sometimes sketchy record keeping and simply the passage of time.

Koch ultimately filed a civil suit against Rodenstock in 2006 and won a judgment against him by default in 2010. Broadbent, meanwhile, unhappy about how he was portrayed in The Billionaire's Vinegar, sued Random House (which initially published the book) for libel. The dispute was settled out of court but the agreement stopped publication of the book in the UK and, according to the Wikipedia article on Hardy Rodenstock, the settlement forced Random House to state in court that allegations in the book were untrue, yet the company made no changes to the text and it appeared in all other markets. Given that and the ease with which books can be acquired from anywhere through the Internet, the stay of publication in the UK seems to have been a fairly hollow victory for Broadbent. The Billionaire's Vinegar is a mystery solved, a tale of greed and big money, and a cautionary tale all in one. Well researched, briskly written. Recommended.
SaveSave
Posted by Colin Talcroft at 11:15 AM