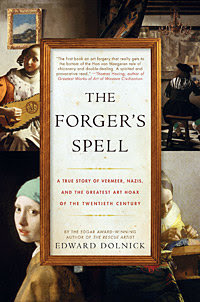 Edward Dolnick's The Forger's Spell (Harper Perennial, 2008) is the story of one of the biggest art hoaxes of the 20th century, the story of how Han van Meegeren, a disillusioned, unappreciated Dutch artist duped a host of collectors, connoisseurs, and wannabe connoisseurs, including rapacious Nazi art thief Hermann Goering. Van Meegeren turned to forgery largely to get back at an art world that neglected him. He specialized in creating fake Vermeers—a comparatively easy target given that artist's small output and only sketchily documented life.

The book reads in places like a whodunnit, compelling for details of how forgers work (particularly, how Van Meegeren discovered he could quickly dry and harden fresh oil paint by mixing it with Bakelite and baking his new paintings in a slow oven); for the story it tells of competitive art looting between Hitler, Goering, and other top Nazis; and for its detailed chronicling of Van Meegeren's initial success as a forger, his unmasking, trial, and downfall, and his later rehabilitation in the popular mind as he came to be seen as a hero for fooling Goering. Having said all that, The Forger's Spell is perhaps most rewarding for the answers it suggests to perhaps the most interesting question about forgeries that have been revealed; how do clearly bad paintings take in people who really should know better? 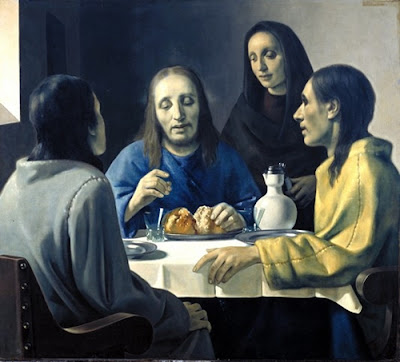 As the author points out, many of the paintings by Van Meegeren that fooled scholars and collectors alike were clearly bad. His biggest success was perhaps his sloppiest. Van Meegeren's Christ at Emmaus, pictured above, was a crude attempt to suggest what Vermeer might have done with this Biblical subject under the influence of Caravaggio. The experts wanted to believe in the authenticity of the work because many believed Vermeer had been influenced by Caravaggio and that, in some sense, there ought to be such a painting. What is startling is that the obvious Vermeer-esque touches in this generally crude painting were enough to convince so many people. They include the single window to the left with light raking in from the side (although Christ's face ought to be in deeper shadow); the use of blue and yellow; the composition itself (roughly taken from a Caravaggio depicting the same subject); the placement of the hand on the table (a reference to a genuine Vermeer, The Astronomer, in the Louvre); and the jug on the table, an element in several genuine paintings by Vermeer. Van Meegeren's forgery is an object lesson in the power of playing on what people want to believe, and, in some instances, need to believe to preserve their standing among professional peers once committed to an assessment. Author Dolnick persuasively suggests that forgery done well (in the sense of forgery done successfully--setting aside the quality of the work) usually involves the people fooled doing most of the work for the forger. A committed believer will work hard to preserve his reputation.