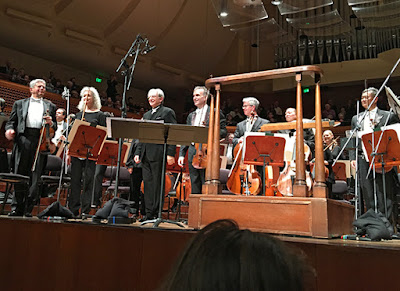 I attended the March 23 performance of the San Francisco Symphony at Davies Symphony Hall. MTT conducted. Gil Shaham performed Berg's Violin Concerto before intermission. Mahler's Symphony No. 5 followed the intermission. Although I have two recordings of the Berg concerto, a recent one by Gil Shaham (1930s Violin Concertos Volume 1, Canary Classics CC12), the other from 1984 (the first CD I ever bought) by Kyung-wha Chung, (London 411 804-2), I don't know the piece well enough to have a strong opinion about the interpretation, but I enjoyed watching the performers, particularly as the session was recorded for the purpose of a release on CD. The soloist was flanked by a pair of microphones and there were several in positions not usually present, although all San Francisco Symphony performances are recorded for the archives, I believe. 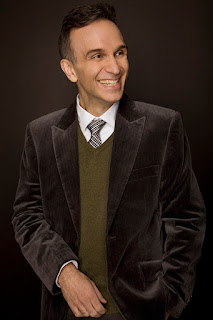 It was particularly interesting to watch Shaham with concertmaster Barantschik and associate concertmaster Nadya Tichman in some of the more lyrical passages where the two lead violins seem to double the soloist. I noticed also that the antiphonal seating arrangement was used for this concert, presumably because that's what Mahler would have imagined. In this arrangement, the first violins are where we are used to seeing them in the US but the second violins are on the other side of the conductor, where we normally would expect to see the cello section, with the violas toward the middle but closer to stage left (audience right), the cellos toward the middle but closer to stage right (audience left), and the basses more or less behind the first violins. Doing a little research, the familiar arrangement with the first and second violins stage right, the violas in the middle, the cello section stage left, and with the basses behind the cello section was apparently thought up by Leopold Stokowski and the change is referred to as "the Stokowski shift." Watching a live performance always highlights the sort of thing you might not notice listening to a recording.

I'm generally not a fan of MTT. In fact, when buying subscription seats, we usually go out of our way to avoid him, choosing the guest conductors instead. I suppose mine is a minority opinion, but when I've seen him conduct, he often seems aloof—bored even, simply going through the motions. I've never really been impressed. Watching him conduct the Mahler 5th was different. He seemed quite the opposite—intensely engaged throughout the performance, keeping the orchestra with him the entire way. 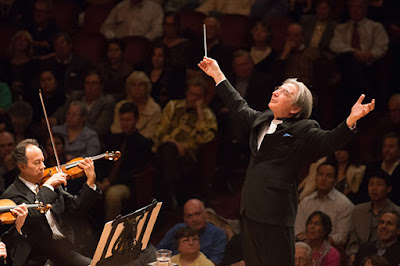 And a long way it is. The performance lasted 82 minutes. While that included longer breaks between movements than would be typical in a recording, I'd say it was just under 80 minutes of actual playing. I went back through my various recordings of this piece. The shortest of them is 62 minutes, a 1975 recording on LP from Maurice Abravanel and the Utah Symphony (Vanguard Everyman SRV 321/2), the longest 74 minutes, a 1969 recording by Barbirolli and the New Philharmonia Orchestra re-released on CD in the early 1990s (EMI Classics CDM 7 64749 2). Coincidentally, the three others I have are all 69 minutes--Rattle and the Berlin Philharmonic recorded live in 2002 (EMI Classics 5 57385 2), another live recording, this time with Solti and the Chicago Symphony (Decca 433 329-2), and a recording by Sinopoli and the Philharmonia Orchestra (Deutsche Gramophon 415 476-2). All of which is to say that MTT's reading was a very slow one, yet it felt perfect. In fact, much of its strength seemed to come from his willingness to resist the temptation to rush in places where the temptation must be great. This was the first time I'd heard MTT doing Mahler (for which, he is known, of course). It was a very persuasive performance indeed. The performers were superb throughout. In places the clarity and precision of the playing was breathtaking. Perhaps MTT is just lackluster when he's bored?