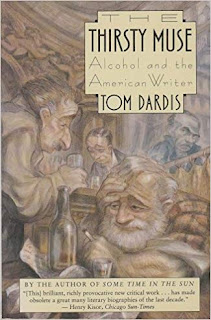 Tom Dardis, in The Thirsty Muse: Alcohol and the American Writer (Ticknor & Fields, 1989), looks at four American writers—Faulkner, Fitzgerald, Hemingway, and O'Neill—and their relationship with alcohol. He argues that, while these men believed drinking aided their creativity or was even essential to it, alcohol was more often responsible for their creative decline.


The book asks why so many American authors have been alcoholics. Dardis points out that of the eight Americans that have received the Nobel Prize in literature (at the time the book was written), five were alcoholics. The number of winners has swelled, however, and the list would in any case depend on how one defines "American." I had to look it up, but the group would now be: 1930 Sinclair Lewis, 1936 Eugene O'Neill, 1938 Pearl S. Buck, 1949 William Faulkner, 1954 Ernest Hemingway, 1962 John Steinbeck, 1976 Saul Bellow, 1978 Isaac Bashevis Singer, 1987 Joseph Brodsky, 1993 Toni Morrison, and 2016 Bob Dylan. As none of the last three appear to have been alcoholics, the argument has been somewhat dimmed by time, and Dardis never really answers the question of why there have been so many drunk American writers (including plenty that were not Nobel Prize winners). The book also seemed a little flawed in its assumptions about the nature of alcoholism the disease, which in places seemed a trifle out of date. Nevertheless, the book is nicely written, engaging, and fascinating for its details of the lives of four important writers, particularly details about the role that writing for Hollywood had in the lives of Faulkner and Fitzgerald (in both cases, the only way they could make money once publishers began rejecting their work). Worth the time.
Posted by Colin Talcroft at 11:30 AM